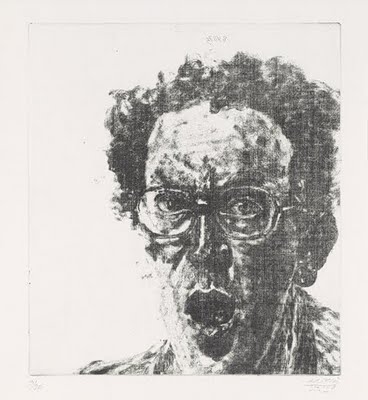 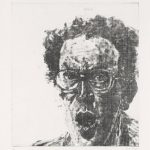 Avigdor Arikha, an internationally renowned Israeli and French painter died at his home in Paris on last Thursday, the day after his 81st birthday. A Holocaust survivor, his works were a continuous search for truth. His last interview with Haaretz can be found here. His death was bigger news than the death of Moshe Hirsch, 86, a member of Neturei Karta, who was close to the late Yasser Arafat. From Hirsch’s home in Jerusalem’s Mea She’arim neighborhood, he worked to destroy the political existence of the State of Israel.

Aaron David Miller, although not a lauded artist, also was searching for truth. He wrote the cover story of the new issue of the redesigned Foreign Policy magazine. His article is titled, “The False Religion of Mideast Peace And why I’m no longer a believer.” Miller is currently a public policy scholar at the Woodrow Wilson International Center for Scholars and the author of The Much Too Promised Land: America’s Elusive Search for Arab-Israeli Peace. He writes that he can no longer keep a straight face and write that the Arab-Israeli issue is a central issue and the United States needs to fix it. He adds that, “Right now, America has neither the opportunity nor frankly the balls to do truly big things on Arab-Israeli peacemaking. Fortuna might still rescue the president. The mullahcracy in Tehran might implode. The Syrians and Israelis might reach out to one another secretly, or perhaps a violent confrontation will flare up to break the impasse. But without a tectonic plate shifting somewhere, it’s going to be tough to re-create the good old days when bold and heroic Arab and Israeli leaders strode the stage of history, together with Americans, willing and able to do serious peacemaking.” 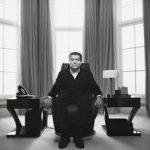 On the topic of tectonic plates, The New Yorker magazine profiled Haim Saban, the Hollywood king of kids Saturday morning animation, Univision TV, and more. There is a whisper campaign saying that Saban tried to use his Power Ranger’d influence to soften the story. Connie Bruck writes that Sabanseeks to apply his Hollywood mogul power to American foreign policy, a pro-Israel one. He wants DC to realize that its Israeli wife is worth rubies and far more than its Arab mistresses. From his home in Beverly Park, with Jerusalem stone tiles, a leather, yes leather, ceiling, Israeli antiquities and paintings by Chagall, the story details how Saban, 65, is using his estimated wealth of $3.3 Billion to help Israel in the power center of Washington DC, or at least in the home of Joe Biden. (Speaking of a Biden-esque moment, do you remember the story about how Saban was negotiating with Gene Simmons for the rights to KISS branding. 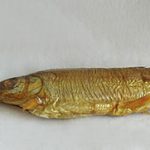 Saban, reportedly spoke Hebrew at the meeting to his partner saying that he would screw over Simmons and ‘gut him like a fish.’ Little did Saban realize that Gene Simmons, the son of Israelis, spoke and understood Hebrew.)

Speaking of leather ceilings, or chairs, overheard whispers around the White House are that President Obama will nominate a Jewish woman for a seat on the U.S. Supreme Court.

On the topic of holding court, The New York Times reported, on this weeks opening of a Japanese style kosher steak and sushi restaurant in NYC. Prime KO was packed for its opening, and featured Jamie-Lynn Sigler, an actress from “The Sopranos,” and Hebrew school graduate.

No kosher sushi was served in suburban Detroit to a group of Jewish people that The Times interviewed for its story on the third rail of American Judaism, namely wheat happens to those who publicly make critical comments of Israel. The story, titled “On Israel, Jews and Leaders Often Disagree,” is a synopsis of recent comments by Ed Koch, Abe Foxman, rabbis, academics and the Jewish mass on the topic of Israel and dissent.

The NYT Sunday Magazine reported on the 20-somethings who work in the Obama White House. What is hot? Long hours and prestige… and Friday night Shabbat dinners. “… Eric Lesser looked out over the containers of Thai carryout, the bottles of wine and the Shabbat candles. â€œShould we do Shalom Aleichem?â€ he asked, and the whole table began singing a warbled but hearty version of the song that welcomes Shabbat. In Lesser’s group house of Obama staff assistants, Friday-night Shabbat dinners have become something of a ritual, a chance to relax and spend a few hours with friends, reflecting on the week….” Definitely a must read. 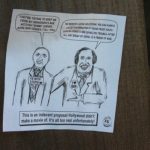 Poster that was glued to Lerner's fence

Someone who was accused of dissent was Michael Lerner, the editor of Tikkun magazine. Part of his Berkeley, CA area home was vandalized, and the SF Jewish Bulletin reports that police are investigating. Lerner is blaming right wing’ers for the vandalism of his painted fence.

Neither right wingers, nor Debra Winger, vandalized the fence of actress Sandra Bullock or her friends, where the Oscar-winning actress blind-sided many in the Jewish media by holding a bris for her newly adopted son (back in January). The Los Angeles Jewish Journal reports that the actress, who is not Jewish, arranged for a mohel to do the deed. It is not known if chickpeas were served.

If Sandra Bullock moves to Minnesota, she can send her new son to the Talmud Torah school in St Paul. The Minneapolis Star Tribune reports that the Jewish day school has found the funding to remain open, but it will cut out four grades. The school will change from K-8 to K-4. The Talmud Torah of Saint Paul… makes me think of Temple Sinai of Corpus Christi … or Saint Mary Hasidim (just kidding)

And speaking of mothers, just in time for Mothers’ Day, a U.S. court has ruled in favor of a comic who made Jewish mother-in-law jokes a part of her act; and as a result, she got sued by said mother-in-law. In a 21 page ruling, EDELMAN V CROONQUIST, the district court in New Jersey ruled that comedian Sunda Croonquist can continue making fun of her Jewish mother-in-law. Croonquist, who identifies as a half-Swedish, half African-American woman who married a Jewish man, was sued two years ago by her in-laws who were offended by her jokes. Her husband, attorney Mark Zafrin, represented her as her defense attorney. Happy Mothers Day.

(They obviously will not be visiting One2One, to add their six word memoir of their mothers or 6 words on why moms matter).