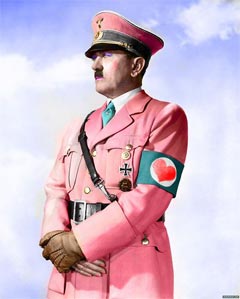 I mean how are you supposed to react to this image?? Is it offensive to Jews? Gays? Cross dressers? It’s just SO over the top. In case you were wondering, this image was part of a Sicilian advertising campaign, featuring 18 foot high billboards promoting an Italian clothing brand. Consumers were urged to “Change Style â€“ Don’t Follow Your Leader.” People in Palermo were understandably outraged but, well, what are you going to do? Personally, I’m kind of amused as well as impressed by the amazing Photo editing skills used to make this, and I know there’s nothing more that pisses off Fascists and Nazis than to impugn the manliness of their Fuhrer. And I like pissing off Nazis, Fascists and stupid mean people.

A council official, Fabrizio Ferrandelli, said: “Having Hitler’s face on a poster… cannot be passed off as an innocent advertising message. Seeing these posters in front of schools is an embarrassment.” But the advertising agency which came up with the idea said critics of the campaign were over-reacting… The Hitler poster was a tongue-in-cheek way of encouraging young people not to follow the crowd in their fashion choices… “We have ridiculed Hitler in a way that invites young people to create their own style and not to be influenced by their peers,” said the agency’s Daniele Manno.

Stay tuned for the next leg of this campaign which will feature another murderous leader, Mao Tse Tung! But in the meantime, enjoy these: