If Seth Rogen’s Parents had just Stayed in Israel… 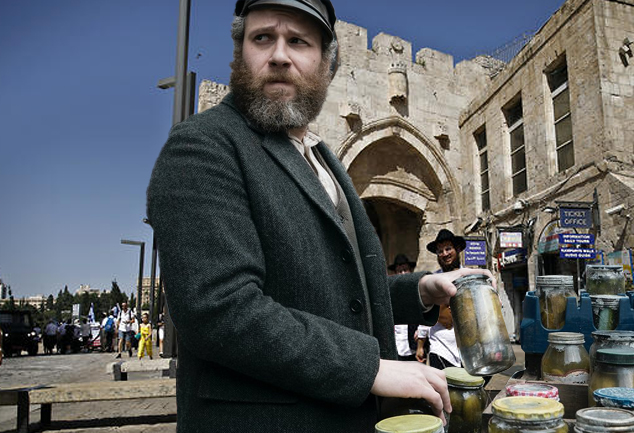 So Nick Cannon went off on Jews in a Louis Farrakhan-inspired diatribe and got his ass handed to him when ViacomCBS cut all ties with him. He later apologized, had a nice chat with the Wiesenthal Center’s Rabbi Abraham Cooper and before you know it, he fasted on Tisha B’Av, read and spoke favorably about Bari Weiss’s book on fighting antisemitism. Now the Jews are beginning to look upon him favorably again, convinced of the sincerity of his repentance. Canon wrote about Weiss’s book on Instagram that “the words that stood out to me were “Anti-Semitism is fueled by the malicious but often feeds on the ignorance of the well-intentioned.” Asking myself, is she talking about me?” Beautiful. That’s definitely one great way to get out of a jam with the Jews – exhibit loads of sincere remorse. Lots and lots.

Seth Rogen, while promoting his upcoming movie An American Pickle on Mark Maron’s WTF podcast, also said some things that were a bit… impolitic: “I don’t understand. To me it just seems very, like an antiquated thought process. Like, if it’s for religious reasons, I don’t agree with it because I think religion is silly. If it is truly for the preservation of Jewish people, it makes no sense, because again, you don’t keep something you’re trying to preserve all in one place especially when that place has proven to be… pretty volatile. “I’m trying to keep all these things safe, I’m going to put them in my blender and hope that that’s the best place! That will do it!” It doesn’t make sense to me. And I also think that as a Jewish person, like I was fed a huge amount of lies about Israel my entire life.” Of course, Twitter and social media immediately lit up with folks freaked out that the Jewish-Canadian stoner comedian was ready to cancel Israel because it made no sense. Also adding fuel to the fire was the fact that anti Zionists almost giddily repeated Rogen’s words favorably because they were voiced by a Jewish celebrity.

Another noteworthy thing that happened was that several of Rogen’s critics reached out to the embattled comedian, offering to have a chat with him about why his words were so hurtful. While I am certain that many of these offers were well intentioned, some of them reeked of star fuckery, motivated by the desire to be involved in a well publicized Rabbi Cooper moment as the champion of the Jewish people and all that’s good. Rogen for his part did actually DM a number of people on Twitter, all of which was hinted at lest they seem too eager. One notable person that reached out to mixed effect was former head of the Israeli Labor party and current head of the Jewish Agency, Isaac Herzog. The end result?

The Jewish Agency released a statement Monday announcing that its chairman, Isaac Herzog, held a Zoom conversation with Rogen in which he said the comedian “apologized” for any misunderstanding. This came in the wake of a letter by Herzog expressing his dismay over what Rogen had said on the podcast. Rogen denied that he apologized, adding that the Jewish Agency head did not represent the conversation accurately and violated a promise of privacy: “I did not apologize for what I said. I offered clarity. And I think [Herzog] is misrepresenting our conversation.” … According to Rogen, Herzog “sent a letter to my mother somehow, on official letterhead – very fancy letterhead. My mom implored me to call this guy and I did and told him I thought this was a private conversation and I hoped it was a private conversation. After all, I did it because he reached out to my mother asking to talk to me,” he said. “At no point did I give him permission to publish any part of the conversation.”

Typical, sinewy Israeli. On the other side of the political spectrum, activist writer Mairav Zonszein was so thrilled that she was able to get a DM from Rogen that she pinned it to her Twitter feed, lest anyone miss her brush with fame: 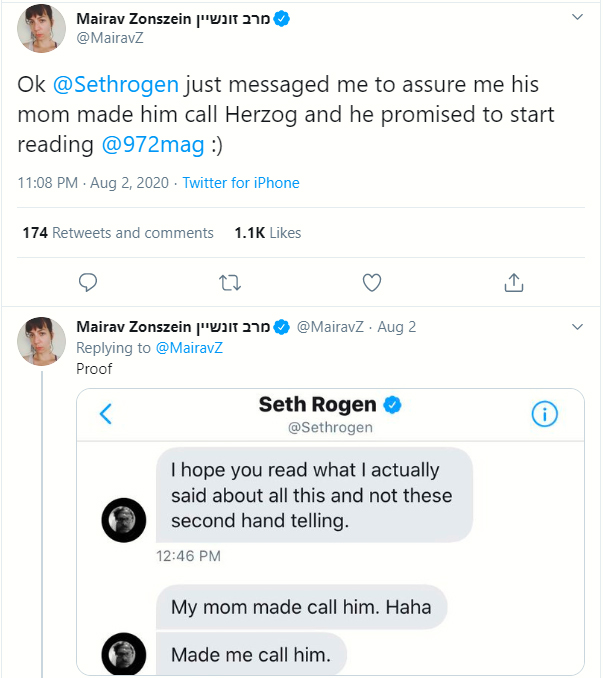 The question now is, who is the winner and who is the loser in all of this? Israel definitely missed out. Had Rogen’s family stayed in Israel (His parents met on a Kibbutz and his Dad really wanted to stay then maybe we’d have some quality pickles here in the Holy Land instead of that Beit Hashita crap they sell in cans. Can you imagine Rogen as a sinewy Israeli selling pickles from a cart in front of Jaffa Gate? That would be something! As far as who the winner is? Without a doubt, the PR team for An American Pickle, streaming this Thursday on HBO Max. For the record? HBO Max is not available in Israel. Ha. Screw you Zionists!

I’m convinced INN is an account whose sole purpose is to troll. And to front like they’re relevant.

PS @Sethrogen our DMs are open — we’d love to connect and collaborate on fighting the GOP’s white supremacy/antisemitism and for a brighter future for Israelis/Palestinians ??

I wish Seth would have talked to Avi instead of to Bouji Herzog. Avi would have been smarter about it.

I like @SethRogen a lot and laughed out loud throughout "Neighbors."

At the same time, I find his comments about Israel troubling and, as someone raised in both the U.S. and Israel, would be interested in discussing them with him.