She Sees Sea Shells at the Shanghai C-Shore

Hungering for some good Israeli in China? Then head to Shanghai where the Israel Pavilion has opened at the World Expo, a six month long expo which is expected to host 70 million visitors through October 31, 2010.

The Israel Pavilion is tear-drop shaped and is made from stone and glass in an interlocking yin-yang design. The innovation and transparent glass links to the ancient historical stone. It looks like a handshake between the two nations, or perhaps it is a Shanghai-like seashell. (Shanghai literally means on the sea.)

Yaffa Ben-Ari, the deputy commissioner of the pavilion, said that the pavilion’s three parts (the Enlighten Garden, the Hall of Light, and the Hall of Innovation) will “join hands” with each other to represent the relationship between the country’s past, present and future. $11 million was allocated by Israel’s Foreign Ministry to build and operate the pavilion; and that can buy a lot of Jiaozi (or wontons). 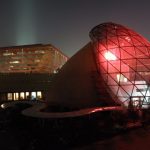 A night light for Shanghai

Out of 23 entries, the winning design came from Haim Dotan Architects. Dotan designed it with Prosper Amir. Dotan is a senior architectural lecturer in Bezalel Academy of Fine Arts in Jerusalem and a former lecturer at University of Tel Aviv. He is a public Director of the Jaffa Redevelopment Agency. Among his firm’s designs are the Tel Aviv’s Bezek and MTVS office towers.

A video of the pavilion design concept can be seen HERE. Fortunately, a covered walkway leads to the pavilion, which will shield visitors from the Shanghai Summer heat during what will probably be very long waits. The walkway looks like an umbilical cord that snakes its way to the tear that rises from what for me, seems like an oasis. 54 (triple chai, triple happiness) orange trees line the walkway, along with 3D video screens, Israeli designed, of course, to keep everyone occupied with information. The interior exhibits will tell the story of Jewish and Israeli history, and show images of beaches, orchards, technology, people-hood, commerce and spirituality. Visitors will be guided by young Israelis who speak Chinese. The presentation is in Chinese with English subtitles and heavy on the story if Israeli technology (computers, space and medical tech, PillCams) , because let’s be pragmatic, one of the many underlying agendas is to leave attendees with a good impression and a desire to purchase Israeli tech goods. 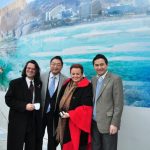 Dotan and Ben-Ari make friends at the pavilion

Ben-Ari doesn’t see the pavilion as a staid museum exhibit but “a way of making an emotional connection. It’s a dialogue between the old and the new, tradition and the future.” When Ben-Ari started the project, she was surprised to learn that the average Chinese citizen thought there were nearly 100 million Jewish people on Earth and not the mere 14 million. The pavilion will be a chance to share information on Israel and the Jewish nation with expo visitors.

Jackie Eldan, Israel’s consul general in Shanghai, sees the Expo as an opportunity to pay honor, kavod, and respect to China, and to educate Israeli businesspeople and government leaders about the vast and growing Chinese market (and Israel’s capabilities.) Eldan reported that although Israel buys more from China than China buys from Israel, if you look at just Shanghai and its 3 adjacent provinces, Israel sells more to China than it buys. 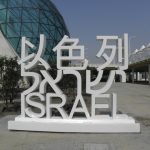 So, that's how u spell Israel in Chinese...

“On the whole Israel and China trade is valued at $6 billion.” Eldan added that Israel’s pavilion at the Expo is, “… a way for Israel to say â€˜thank you’ to the city of Shanghai â€“ a city that gave refuge to Jews during the Second World War. In the most difficult time for Jews in human history, it was Shanghai that opened its doors to Jews even though later on they were facing a very difficult reality themselves… The Jews in Shanghai enjoyed safe haven. So it’s a combination of a bilateral relationship, a heritage and a commercial platform.”

The pavilion has already been given a nickname in Chinese. It is called “Hai Bei Ke,” or seashell. Yes, yes.. .very nice, but will they be serving SoomSoom noodles with “Tat-Aluf TSO’s Chicken” there?