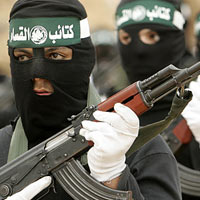 If you listen to people like Norman Finkelstein, they like to make the point that Hamas was elected democratically. What they typically neglect to mention is that Hamas, in order to take over, resorted to severe violence against Fatah, the other major Palestinian party and the party which controls the Palestinian Authority. One of Hamas’s tactics during their little fight with Fatah was to throw their men off rooftops or kneecap them. It turns out that the PA has asked Israeli doctors to rehabilitate their injured, which is being done.

Let’s not make any excuses for Hamas, they are evil. However, one has to ask why the Palestinian Authority, which relies on Israel to protect it from Hamas, to rehabilitate their injured, to help their economy grow (currently at 12% annually), won’t come to peace with Israel. This is an infuriating conflict, but one of the reasons it’s infuriating is that we have knows what a peace deal will look like since 2000. Why isn’t the world putting pressure on the Palestinians to accept the deal? We had an offer from Barak and in 2008 an offer from Olmert (the lame Left attempts to deflect this offer by claiming it “wasn’t official” or that Olmert was a “lame duck). The Palestinians have responded with a desire to bring all their diaspora into Israel and refusal to share the Holy Basin or the Temple Mount. That is where the left and the international communities should be focusing their efforts, on forcing the Palestinians to give up their dream of taking over Israel or getting control over Israel’s most important religious and historic sites. The peace is there for the taking.