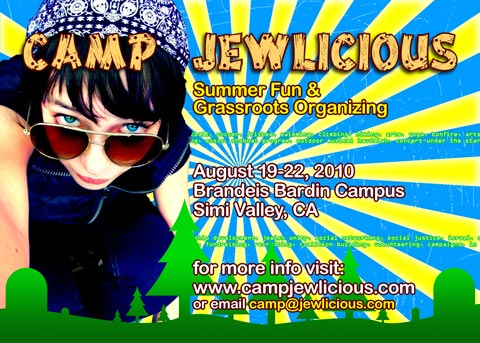 I never went to summer camp. My Mom said that summer camp was for Ashkenazic kids whose parents just wanted to get rid of them for the summer. My friend told me that Ravenscroft Summer Camps were fantastic so I was pretty jealous to be honest. Instead my parents and sisters would pack a cooler on Sundays and hit one of the many lakes in Quebec, Vermont and upstate New York. I honed my outdoor chops on occasional overnight camping trips and fishing excursions with my Dad. These close knit family trips stand out as some of the happiest times of my life.

But… I guess there’s something to be said about Jewish camp. My Ashkenazic classmates (the ones whose parents hated them) seemed to always come back from summer camp genuinely happy, people seem to always cite their summer camp experiences as a defining part of their adolescence and a teacher at Hebrew Union College in Jerusalem told me that a significant percentage of those going into the Reform Rabbinate are, to one extent or another, simply trying to prolong their camp experience. Wow. Powerful stuff this summer camp thing!

Thus it cam as no surprise to me when Rabbi Yonah first broached the subject of having a summer-time Jewlicious event centered on reliving the summer camp experience – but as adults! What does that mean? A lot less rules, more intelligent programing and uhm… super duper cool counselors! OK, maybe I was kidding about the cool counselors, but Camp Jewlicious will in all likelihood be a lot cooler than your own summer camp experience.

In typical Jewlicious style we will combine awesome programs and speakers with great music and one of the best camp facilities I have ever heard of! The Brandeis Cardin campus is actually 300 lush beautiful acres with activities ranging from horseback riding to mountain biking. The facility has a great pool, zip lines, rock climbing walls – let’s just say, you won’t lack for things to do, that’s for sure.

For those of you wishing to relive Jewish camp – Camp Jewlicious has got to be an irresistible proposition. As for me? Well let’s just say that Mom understands. Does all this sound enticing? Then head over to CampJewlicious.com and sign up today! I’ll see ya there!