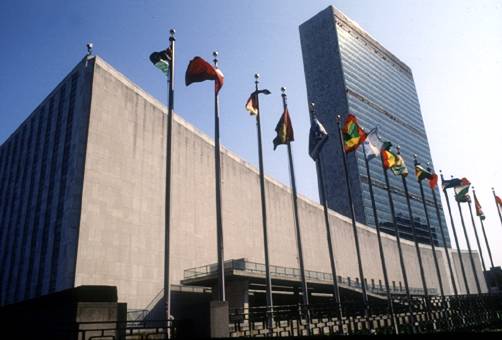 It appears the Muslim bloc and its African supporters are back in action, but for once Israel isn’t their target. Nope, this time they are going after gays.

The International Gay and Lesbian Human Rights Commission (IGLHRC) and ARC International are deeply disappointed with yesterday’s vote in the Third Committee of the United Nations General Assembly to remove a reference to sexual orientation from a resolution on extrajudicial, summary or arbitrary executions. The resolution urges States to protect the right to life of all people, including by calling on states to investigate killings based on discriminatory grounds. For the past 10 years, the resolution has included sexual orientation in the list of discriminatory grounds on which killings are often based.

The removed reference was originally contained in a non-exhaustive list in the resolution highlighting the many groups of people that are particularly targeted by killings – including persons belonging to national or ethnic, religious and linguistic minorities, persons acting as human rights defenders (such as lawyers, journalists or demonstrators) as well as street children and members of indigenous communities. Mentioning sexual orientation as a basis on which people are targeted for killing highlights a situation in which particular vigilance is required in order for all people to be afforded equal protection.

â€œThis vote is a dangerous and disturbing development,â€ said Cary Alan Johnson, Executive Director of IGLHRC. â€œIt essentially removes the important recognition of the particular vulnerability faced by lesbian, gay, bisexual and transgender people – a recognition that is crucial at a time when 76 countries around the world criminalize homosexuality, five consider it a capital crime, and countries like Uganda are considering adding the death penalty to their laws criminalizing homosexuality.â€

In favor of the amendment to remove sexual orientation from the resolution on extrajudicial, summary or arbitrary executions (79):

Now let’s look at the opponents:

Opposed to the amendment to remove sexual orientation from the resolution on extrajudicial, summary or arbitrary executions (70):

Next time Queers Against Israeli Apartheid hijacks a gay pride parade with their anti-Israel activism, or John Greyson makes some lame video asking Elton John not to perform in Israel, make sure to remember this vote.

I know, I know, you are asking yourselves how the Palestinians would vote if they had a state. Would they vote like Afghanistan, Algeria, Bahrain, Egypt, Iran, Iraq, Jordan, Kuwait, Lebanon, Libya, Morocco, Qatar, Saudi Arabia, Sudan, Syria, Tunisia, United Arab Emirates and Yemen? Or would they vote like Micronesia, Uruguay and…Israel?