Everybody wants to get into the act!

They hear the JewliciousFest is kicking off in Long Beach and they need to ride on the publicity coat tails. 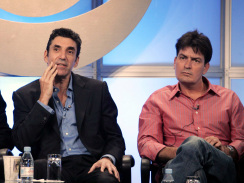 Lorre and Sheen in happier times

Charlie Sheen, the star of America’s top rated situation comedy, Two and a Half Men, gave an radio interview to one of his “friends,” Alex Jones, (or maybe a profiteering fr-enemy), in which he made fun of the show’s writer and co-creator, Chuck Lorre. Charlie Sheen, who is undergoing self treatment for various addictions and illnesses, continued to call Chuck by his birth name of “CHaim Levine,” criticizing him as a charlatan who owes Sheen for turning his tin to gold. Continuing to call him “CHaim” during the interview, Sheen, the brother of Emiliio Estevez and son of Martin Sheen, called Lorre a maggot and wished him pain in his silly travels. (Mr. Lorre is currently visiting Israel for the first time and loving it and qvelling about being around so many normal proud confident multi-strata Jewish people. Lorre is a creator of Dharma and Greg, Big Bang Theory, and other shows)

Not to be outdone, Glenn Beck, this week, compared Reform Judaism to radicalized Islam. He apologized on Thursday. Beck said, â€œI made one of the worst analogies of all time. And I knew it when I said it. Here I am talking about Judaism and I start comparing Islamic extremism. It was a nightmare.â€