It Gets Better – The Jewish Angle

Last summer, each week, the news had a story about a young teen who was bullied for being gay or being perceived as gay who then committed suicide.

Dan Savage, a Seattle based sex and relationships columnist, a sex blogger (slogger), was outraged. After the suicide of Billy Lucas, Lucas’ tormentors posted insults on his memorial facebook page. A reader of Savage wrote Savage saying that she wished she could have told Lucas that life gets better if only he just would have hung in there.

It Gets Better?… hmm… Savage decided, with Terry Miller, (his husband in Canada or his partner/bf in Seattle) that they would post a video to YouTube, telling kids that “It Gets Better.” The video and more like it, and social networking, could bypass parents and principals and get directly to kids.

Their first attempt at a 15 minute video was 14 minutes about how they were bullied and 1 minute on how they found joy after high school. They threw that one away.

Their next video was 14 minutes about how they had joy, and how it got better. They posted it to YouTube on 9/22/2010. They hoped to get 100 videos submitted, a nice round number.

The next day, an engineer from Google called Savage. They decided to change the coding to allow for 5,000 videos on the Trevor Project / It Gets Better channel.

At the end of the week, there were 1,000 uploaded videos

Within four weeks the U.S. White House called: Could President Obama submit a video to ItGetsBetter.org and the TrevorProject? There are now more than 10,000 videos that have had over sixty million views. 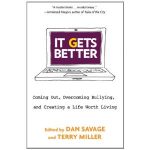 Youtube is the technology of the moment, but who knows what technology will be hot when current four year olds are fourteen. The project decided to transcribe about 110 of the videos into book form… books that can be read in libraries, given as gifts, borrowed, or browsed in stores. The theme of the essays is why gay, questioning, outsider, bullied, or any youth should not kill themselves and be self destructive; since their lives will and do get better. It also includes resources and suggestions. Savage, at the book’s launch on March 22, in Manhattan said, “It gives hope to those facing despair, but it will not put an end to bullying by parents, adults, or peers… It is a fact that the videos have saved lives. Parents have told me… I want kids to know that there is more than enough joy to compensate for the pain one experiences in high school and middle school.”

Several of the selected essays are by Jewish gays and lesbians. They include Rabbi Sharon Kleinbaum, the senior rabbi at Congregation CBST in Manhattan; Jules Skloot, the Brooklyn based dancer and choreographer, graduate of Hampshire and Sarah Lawrence, and member of Jews with Tattoos; and Dr. David Rosen in Ottawa writes with his partner, Sean B Lane.

Six gay Orthodox Jewish young men, leaders of JQyouth.org, have a group essay in which they discuss life growing up in Orthodox, Haredi and Hasidic homes and Jewish summer camps, their survival in these institutions and environments, and their current, happy, observant and productive lives. Their essay pretty much makes you want to buy several copies of the book and donate them to Jewish schools, synagogues, youth group libraries and camps.

Barbara Gaines, 53, is currently the Executive Producer of the Late Show with David Letterman has an essay in the book. She writes of growing up on Long Island, playing clarinet in the school band, and attempting suicide after college. But if she had died in 1979, she would have missed out on the rest of a fabulous life, her partner, their 4 year old, and her life at the CBST synagogue. Adam Roberts, a Jewish graduate of Emory and star of the Food Network and the Amateur gourmet flogger (food blogger) site writes a hilarious essay on cooking a Friday night meal for his parents, his partner, and his partner’s parents. In between recipes and tangential asides on food, he discusses being bullied in school, and finding how to express himself in a comedy troupe in college. As he says, high school is like a cold depressing tv dinner, but it gets better and you might end up as a plated dish of braised (braised!!) short ribs with polenta (*not kosher)

There are also essays by Michael Feinstein, a piano player; and Suze Orman, 60, a Jewish financial adviser and proud lesbian who says life is not easy, but it is all worth the struggle. Andy Cohen, EVP of Bravo and head of original programming writes of growing up in St. Louis and wondering if he would be Charles Nelson Reilly and Paul Lynde; finding himself during a year abroad at college; and being himself for the rest of his life. Jessica Leshnoff writes about growing up and thinking she was a bad person and a bad Jew, a spiral of self-loathing, that she overcame. Jake Kleinman, who is finishing Med school at Tulane, and will start a pediatric residency writes about moving from being scared to being proud. The book closes with an essay by Sara Sperling, a Jewish sorority sister, on being a sorority leader and an essay by performer Kate Bornstein.

The power of the book is that it consists with a wide range of essays, from those by celebrities to those by regular college students. There are essays by rich urban videographers to pieces by poor, rural gays and lesbians. I found it interesting, and plan to donate some copies, since I prefer that Jewish and other adolescents not end up in the morgue. Some interested videos that are not in the book are those by Rabbi David Bauer of San Francisco; Rabbi Denise Eger of Kol Ami in West Hollywood; Rabbi David Horowitz of Pflag; Washington DC JCC and GLOE and Rabbi Shira Stutman (6th and I, DC); the CBST Equality channel; Bryan Mann at Temple University and J Street U; Punk Rock Torah; Black Gay & Jewish; Just Another Gay In The Life; musician Ari Gold (who grew up Orthodox); Broadway stars; and Broadway Part 2.