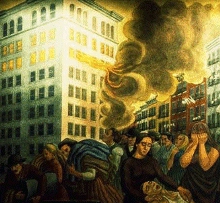 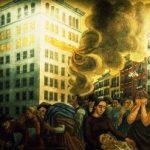 On March 25, 1911, at 4:45 PM a fast moving fire erupted at a Manhattan sweatshop, a garment factory caught fire and led to the deaths of over 146 garment workers, most of them young immigrant women, mainly of Jewish and Italian Catholic heritage. Hundreds were burned and injured. It was the 9/11 of its era, and helped change American labor and workplace laws, progressive politics, and helped to lead to FDR’s New Deal. After the fire, Rabbi Stephen Wise, preached that “…the life of the lowliest worker in the nation is sacred and inviolable, and, if that sacred human right be violated, we shall stand adjudged and condemned before the tribunal of God and of history.”

By the time firefighters arrived, dead workers were already on the sidewalks. The Yiddish Forverts reported that “…there were not enough ambulances and patrol wagons…, so the neighborhood grocers, butchers and peddlers lent their trucks and pushcarts. Scores of neighboring stores were transformed into morgues and hospitals.” Frances Perkins was having tea a few blocks away from the fire. She ran to see the commotion; years later she became FDR’s Secretary of Labor during The Great Depression and intimately recalled the tragedy. 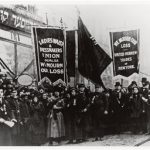 Friday, March 25, marks the centennial of the Triangle Shirtwaist Factory Fire. A “shirtwaist” was a tapered ladies blouse, fashionable since 1890; it was a lightweight liberating woman’s outfit. The Triangle factory occupied the 8th, 9th, and 10th floors of the Asch Building on Washington Square. It still stands on NYU’s campus. Each floor had 10,000 feet of space and hundreds of workers in unsafe working conditions. About 300 machines were on the ninth floor when the fire erupted. Although the building was only a decade old, there were no sprinklers. Panicking workers crowded to escape the building, but the exits were locked. The lone fire escape broke. Some say the doors were locked to stop workers from stealing thread and garments. Others report that managers locked the doors to keep out union organizers. The factory owners, Max Blanck and Isaac Harris, who had rejected worker demands for greater safety and the Protocols of Peace, escaped death by making it to the roof and then to an adjacent building. NYC Firefighters, not yet unionized and working over eighty hour weeks, arrived, but were hard pressed to save lives. 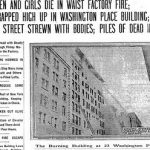 It was 1911. Many of the workers had just returned to work after a months long strike, the Uprising of the 20,000 in 1909, in which women and men fought for collective bargaining rights and better working conditions – namely unlocked doors and more fire escapes. The Triangle Shirtwaist Factory remained non-unionized and had unsafe conditions. 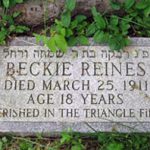 What has changed? Fire codes and working conditions improved. Manufacturing jobs left America and most sweatshops are now hidden from the views of American consumers, overseas. Some sweatshops remain in America; I pass one several times a week in midtown Manhattan. Women, mainly undocumented Spanish speaking immigrants, line up at 7:30 AM each day for sewing work; their pay is reportedly withheld on many occasions by factory owners. What can we do to honor the memory of the tragedy? Read this week’s parshat on how must live a just life? Shop for products that are manufactured in just environments? Ring a bell at 4:45PM? Visit RememberTheTriangleFire.Org and attend one of the events or panels. I plan to give to the Hebrew Free Burial Society today. A century ago they helped to bury several of the fire’s victims, and their work continues.