Therapy and Other Drugs

I was interviewing a therapist the other day, and some of the firstÂ questions that came out of her mouth were, “Do you experience anxietyÂ and depression and have you ever tried taking medication for it?”

Secondly, if I wanted to go on medication, I would have contacted myÂ gynecologist, who could and would write me out a prescription for justÂ aboutÂ anything. I came here to talk. 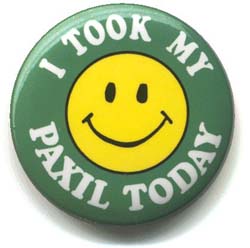 I realized therapy isn’t for me anymore. I felt great walking in, andÂ after an hour of analyzing every thought and fear I had, my moodÂ plummeted and I felt I did need medication after all.

But really, just about every young, smart Jew in this city has a therapist, and they are dolling out anti-depressant drugs like mannaÂ from heaven. I’m not trying to go all Tom Cruise on us, butÂ anti-depressants are just a band aid. Clearly, we’ve got a deeper problem here, folks.

What about dealing with the issues that make us need medication? LikeÂ stimulation overdose, information darted at us from everyÂ direction,Â seeking happiness from external factors, greed, Internet addiction,Â comparing our lives to that ofÂ high school friends on Facebook or ourÂ Jewish mothers? Maybe there’s something we ought to explore somewhereÂ in this list. Better yet, we ought to learn about treatments at DrugAbuse.net or any similar sites that deal with the issue.

Dr. Wayne Dyer, whose own daughter is addicted to prescription drugs,Â throws significant light on the issue. Dyer notes thatÂ in 1970,Â Americans took two billion prescription pills. In 2007, just oneÂ generation later,Â we are up to 113 billion.

“Drug companies have quotas for selling as many drugs like Zoloft asÂ they can,” Dyer says.Â “It’s a huge problem we have to confront as aÂ people. Our legislators,Â lobbyists and politicians all have toÂ confront it. We have to look atÂ what are we creating (as a society)Â when we take drugs every time weÂ have a problem or difficulty.”

As the ambitious, menchy people we are, our brains are on overdriveÂ all day. That can backfire on us, giving us tsuris for sure. But areÂ drugs the best way out? I say no. Charlie Sheen might disagree.

Who you gonna side with?