Mind, Body and Soul in Synagogue

For some people, temple is temple and yoga is yoga. They don’t mix. You may not want to see your Rabbi doing downward dog, or saying â€œNamasteâ€ instead of â€œShalom.â€ I get it.

But for others (like me), a temple that incorporates Eastern philosophies into your service is like a little piece of heaven in NYC.

Take the work of Rabbi David Ingber, for example. Ingber is the grounded and dynamic young leader of the Romemu Center. His background is deeply orthodox and traditional, but he also happened to study psychology, Buddhism and healing at different points of his life. Yes, he became a Yogi in his twenties â€” but, really, who hasn’t done a yoga training program, especially if you live below 14th Street. Ingber blends all his training together at Romemu.

“I understand all the reasons that there needs to be an authenticity (in temple) that we’ve done for centuries, but there is also like this prayer not to just be Jewish but to be a person who is having a spiritual moment,â€ he says. â€œJudaism has always been willing to borrow from other traditions, complementing areas that were not very strong in the Jewish tradition. Abraham, the son of Maimonides, borrowed Sufi techniques from the mystical branch of Islam. It’s hard not to see spiritual aspects to yoga practices, so we bring it into the shul,” he says.

A student of Rabbi Zalman Schachter-Shalomi, who started the renewal movement, Ingber is a cool, down-to-earth and handsome Jewish guy next door meets wise old soul/teacher. But he isn’t too keen on labels, and gets a bit sensitive when people want to classify Romemu’s style and denomination.

“One if the biggest principles of Buddhism is that there is no such thing as the self. All you are is parts. What we call the self, or give ourselves a name â€” it’s our way of giving ourselves a handle on something that doesn’t need a handle. We are so much more complex than the simplistic labels that we use. Labels are important but often turn something fluid and complex, into something simple and solid.The shul, like Romemu itself, is very complex,â€ he adds.

Ingber does note, however, that the congregation and service has changed a lot through the years. Indeed, when I first attended a service about 5 years ago, I thought the scene was a little “different.” There were members passionately singing and swaying all over the place throughout the service, veggie pot lucks that were a bit excessive and some rumored reefer smoking at after-temple parties. Scary, I know.

But the congregation today is more centered and toned downâ€¦ although you still might get a hug when you walk in.

â€œI get frustrated a little bit,â€ Ingber says. â€œI think we can just go so much further with this stuff. I would like to do twenty minutes of silence; ring a bell and do a twenty-minute sit before the shema. But change happens slowly, incrementally. We are still pushing the envelope, but at a pace that invites people in.

Romemu’s more moderate approach seems to be working with the more button-upped NYC goers. Their congregation stands at 280 households and has doubled each year. Romemu is a very inclusive and variegated community. Diversity is present in age, from 20- somethings to 70-somethings and in all other categories. Lawyers and yogis, Rabbis and bankers come to enjoy the atmosphere. If they have their sights on further expansion, I wondered why they aren’t taking advantage of their big singles demographic. Don’t most people go to temple to meet someone? Then I remembered how much I hate the single temple vibe scene. Getting stared down by some Jewish guy only my mother would find attractive usually kills my mood, not to mention my spiritual focus.

â€œI’m happy that people who come to the center are looking for love,â€ he says. â€œThe real question for me though is, in an ideal world, Shabbat is that time when we are not wanting anything else but God. You come to shul and you want to tap into that yearning or longing that can’t be satisfied with the right person or job. So when people come in with
what the Buddhists call a â€œhungry ghostâ€ mentality, your eyes are wandering and you’re not centered and you’re not connected.â€

Single or not, Romemu is a community of spiritual seekers that any open-minded New Yorker would love. They have plans to buy or build a building and be the first synagogue to have a real integration of body, mind and heart. It would be called the ABIA Center (â€œABIAâ€ being a word in Kabbalah and Hebrew for self-expression). I look forward to expressing many tree poses.

Either way, it’s important to Rabbi Ingber that Romemu is thought of as a Jewish spiritual center â€” and that means making people feel at home while also encouraging them to get out of their comfort zones. “It’s always important in a spiritual container to be meeting the familiar and, because of the comfort, to have the courage to walk into the unfamiliar,â€ Ingber says. â€œThat’s when you grow.” 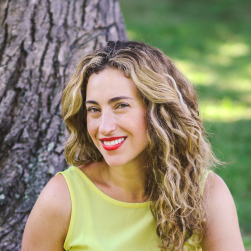 Latest posts by ilanadonna (see all)