Glee, Jews and their noses

Episode 18 of the second season of Glee, titled Born This Way deals with a number of issues: OCD, beards (not the kind you grow on your face), bullies and Lady Gaga. However, the Jews are most interested in how this uncommonly popular manifestation of pop culture addresses the Jewish condition – and this week’s episode is a doozy! It revisits the complex relationship between (some) Jews and their noses. See, Finn accidentally hit Rachel Berry and broke her shnozz. At the Doctor’s office, Rachel was told that she had a deviated septum and that this would be an ideal time for a “vanity adjustment.” The Doctor added “…it’s like a rite of passage for Jewish girls.” 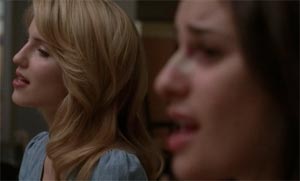 Rachel returned to the Doctor’s office with fellow Glee club member, blonde haired, button nosed Quinn Fabray. Rachel was considering having her new nose modeled along Quinn’s and brought her along for a little photoshop nip/tuck comparison action. Rachel’s fellow Glee club members were universally opposed to Rachel’s planned operation. Fellow Jew Noah Puckerman, the guy who celebrates Rosh Hashanah by watching Schindler’s List with his family, stated “Your nose has been passed down from generation to generation as a birthright. It’s a sign of the survival of our people!”

What to make of all this? Do Jews really have big noses? Rachel Berry is played by Lea Michele. Her nose is definitely prominent, but does she get it from her Father, a Moroccan Jew, or her Mother, an Italian Catholic? As a Moroccan Jew myself, I can tell you we don’t have big shnozzy noses like some of our European shtetl brothers and sisters. Nose jobs are almost unheard of. And of course one should also note that Quinn Fabray, the quintessential shiksa Goddess, is played by Diana Agron who, in real life, is actually ethnically Jewish on both her Mother and Father’s side. So yeah.

I don’t really have any kind of deep and meaningful conclusion to make here. I mean I support Rachel’s ultimate decision not to have a nose job, although given her deviated septum, it may not have been such a bad idea. I can’t help thinking that the decision to get the surgery ought have nothing to do with ethnic imperatives. Jews are a diverse lot and ought not be defined by their noses. Right? Whether someone wanted to visit somewhere like Rhinoplasty Surgery NYC shouldn’t be based on what ethicity they are, since going under the knife is already a big decision in itself.

Besides, we definitely don’t want the legions of goyim watching Glee to think that Jews have big noses. Because then they would make fun of us and then it would only be a matter of time before Der Sturmer-like depictions of Jews became acceptable in mass media and from there it’s just a short hop to jack booted thugs wandering the streets and harassing Jews. For sure!