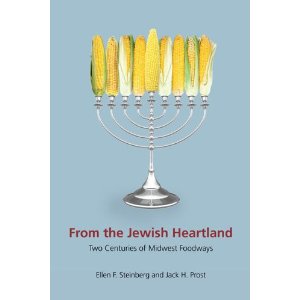 From The Jewish Heartland

I bought and read this book based on its cover. Who wouldn’t be attracted to a menorah of ripe yellow corn? FROM THE JEWISH HEARTLAND. TWO CENTURIES OF MIDWEST FOODWAYS by Ellen F. Steinberg and Jack H. Prost is not a cookbook, nor a recipe book; it is an academic foodways book which is accessible to all of us. It is dedicated to all the Midwestern grossmutters and nonas and bubbes who adapted their Jewish recipes and meals to middle American food sources. The book was influenced by the film, GEFILTE FISH, by Karen Silverstein, a documentary about three generations of one American Jewish family and how they differ in their preparation of gefilte fish, as well as the authors’ acquisition of a 1910 St Louis Jewish cookbook on eBay.

Steinberg and Prost focus on how Jews arrived in the American Midwest and innovated with local produce and foods. Breads used local ryes and were coated with cornmeal, baklava used local cranberries, dark pumpernickles were sprinkled with Iowa sunflower seeds and almonds, catsup was made with Michigan sour grapes, bourekas used Michigan cherries, and gefilte fish was made with Minnesota pike. The book opens in 1761 when Ezekiel Solomon of Berlin survived a Native American massacre and opens a general store. Over the decades more Jewish traders settled in the Midwest and the authors paint an interesting picture of the difficult overland trips and foods of the settlers (horse meat and grass seed). After the Civil War and the additional waves of immigration, with improved transportation and preservation, the authors show how Jews adapted and adopted foods. The authors discuss how the Progressive Era German Jews and social workers attempted to train Jewish immigrants in “American” foodways, and how cookbooks, such as the Fanny Farmer Cookbook of 1896 and the 1901 (Jewish) Settlement cookbooks standardized recipes and cooking methods. Tracking recipes over time, the authors show how brisket and beef a la mode recipes reduced their number of spices needed as a reaction to changing duties and prices, the fear of bacteria, and the abandonment of “fancified French” styles. Fanny Farmer used only salt and pepper.

(Sunday – Potatoes, Monday – potatoes, Tuesday and Wednesday Potatoes. Thuirday and Driday, Potatoes, But the treat on Shabbos is a potato kugel, And Sunday, once again, potatoes.)