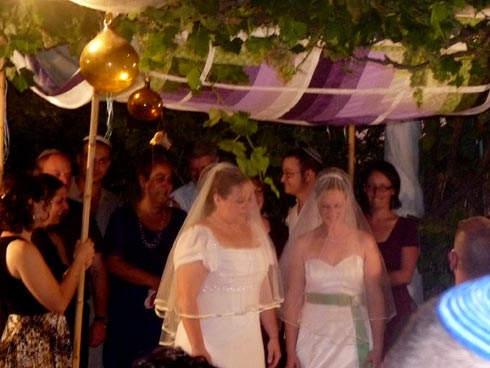 I’m sitting here in Simi Valley, California, working on Camp Jewlicious and the lush setting brings me back… Last week I was in Abu Ghosh where I was blessed to attend the wedding of my dear friends Margot and Tamar. Tamar is an Oncological nurse and Margot works for the World Jewish Diplomatic corps. The ceremony was beautiful – the photo above shows both brides dressed in their wedding finery, surrounded by beaming family and friends.

I know some may take umbrage with this whole exercise, what with the halachic issues and the notion that gay marriage is some kind of threat to the institution of marriage itself. Others will point to the fact that while Tamar and Margot had to get officially married overseas in order to have their marriage recognized in Israel – it was indeed recognized and they now enjoy all the myriad rights and privileges accorded to heterosexual couples in Israel. Me? I don’t want to use this occasion to score ideological points or argue at all.

Tamar is an amazing woman. Oncological nursing is brutal work, caring for people stricken with Cancer is not an easy thing to do. It’s a testament to the size of her heart and her abundant goodness that she would choose such a profession. But there’s more! Tamar also served in the IDF in a combat unit and continues to do reserve duty as a shooting instructor. Such is her love of and dedication to the land of Israel and the Jewish people. Margot is a renaissance woman, an accomplished musician, spectacular shofar blower, a great cook and a tireless advocate on behalf of the Jews, having worked for Hillel, Leadel, and the WJC. I’ve seen Margot in action at the Jewlicious Festival in Long Beach, at the GA in New Orleans and at the Muslim Jewish Conference in Kiev. Tamar and Margot, dedicated residents of Jerusalem, unequivocal lovers of Israel and the Jewish people, thank you for being a part of my life and enriching the lives of everyone you touch.