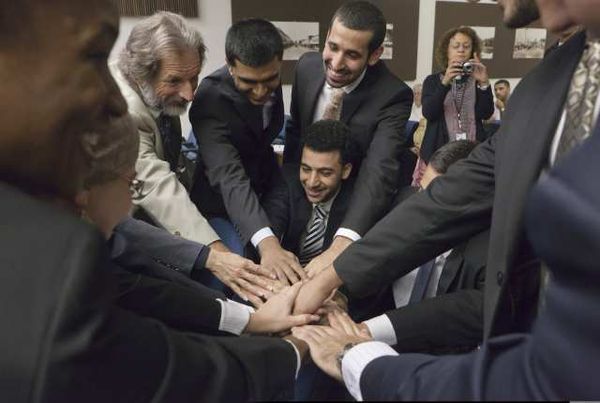 The so-called Irvine 11, actually a bunch of student members of Muslim Student Unions, who waged a yelling battle against Ambassador Oren, were sentenced today to probation. While they claimed free speech, the jury found that they conspired to DENY free speech, and did deny free speech. Muslim groups are crying foul, which is pathetic. Truly pathetic.

The students engaged in civil disobedience. They broke the law. They knew the potential results, yet ignored them. If they had pleaded guilty… they would have been sentenced to community service. Instead, they made a show-trial of a misdemeanor, called the prosecution an effort to silence free speech, especially about Israel, and laughed their way through the trial.

They also had a shoddy defense team, say my insiders.

Yet, they clearly broke California statutes, and would lose all the way to the Supreme Court (where they claim they will take the case if need be).

I was even mentioned during the trial for my Clowns For Israel routine I did during the Neturei Karta speech. They asked why wasn’t I arrested.

Because I didn’t deny anyone the right to speak. Duh.

I’m pretty tired of these guys. I was even asked to sign a letter on their behalf. I agreed to do it, IF they would publicly apologize for their actions. Nope, not a chance.

The saga will continue undoubtedly as they now believe that not only do the Jews control Congress, and the White House, but even the Orange County District Attorney’s Office.