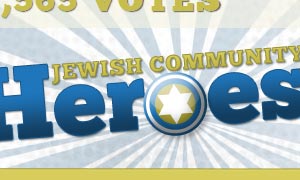 The Jewish Federations of North America’s now annual Jewish Community Heroes contest is in full swing – and how can you miss it? Do they have the banner ads? Duh… look around you. Check! What about the pre-requisite clever viral videos? Check! See below:

Are “Christopher” and “Kesha” really potential baby names among Jews these days? That’s a bit iffy, but the second video features Jewish Moms and food and what can be more Jewish than that? And the videos are both under 30 seconds long so someone’s been listening to fancy shmancy Interweb consultants… or maybe they took my advice and asked any 12 year old kid?

How about great Judges? They have Mayim Bialik (Blossom!), Dean Kamen (invented the Segway!), Randi Zuckerberg (Facebook!), Shawn Landres (Jumpstart!) and more… and some guy called Rabbi Yonah Bookstein who writes for some Jew blog and runs some Festival somewhere… So, yeah, check!

And what about nominees? Well, this year they split it into two categories – Jewish community professionals and Jewish community uhm… regular people. I don’t have much to say about the professionals but the regular people race sure has been interesting! The current leader with 3004 votes is Leah Rubashkin. Sounds familiar? Yeah she’s the wife of convicted felon Sholom Rubashkin of Agriprocessors fame. Now you know where all the Chabad votes are going… My vote is going to Shmarya Rosenberg because he’s awesome, has always been awesome and is a great blogger who could use the support and recognition.

Then there’s a real life, cape wearing, laser beam gun equipped car driving super hero called Hero Man, aka David Filmore of LA. Or how about Patrick Aleph founder of Punk Torah and frontman of CAN!!CAN – I may not always agree with him but the conversation is always good and he’s not from Jew York City. Finally, if they were giving an award for hottest hero, the winner hands down would be Israel activist and actress Noah Tishby, followed closely by NOLA’s Jackie Gothard of course.

Yes. I actually went through pretty much all the nominees. And I have to say I came away pretty impressed for the most part. It’s clear that the spirit of activism and selflessness is alive and well in the Jewish world. People have been critical of this contest, but whatever you think about the internal machinatinations and priorities of the JFNA, you can’t just help but be a little humbled. And maybe inspired. I don’t know. But whatever. Check out the site. Vote for Pedro. Or whoever. Marvel at our people.