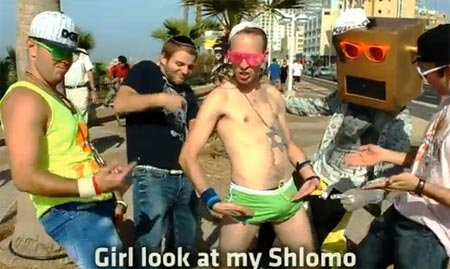 Check out this Jewish cover of LMFAO’s “Sexy and I Know it” it’s called “I’m Jewish and You Know it” and is set mostly on the tayelet in Tel Aviv. According to Richard Silverstein, a well placed source told him that this video was produced by the Mossad and rogue elements in the Russian-Israeli community, and is meant to distract the world while Israel attacks his beloved Iran. No really. Thanks go to our Russian Dolls at Jewlicious.ru for bringing this video to our attention. They were all into it because it was produced by a bunch of young Israeli Russkis. Who knew Russians could be funny!

But here’s the thing, watch the original version by LMFAO:

OK shut up. We can’t just always show Aish Hatorah videos ok? Does the Rosh Yeshivah know that LMFAO stands for Laugh my Friendly Apikoiris off?