The Pakistani Kosher Bagel and Other Timbits 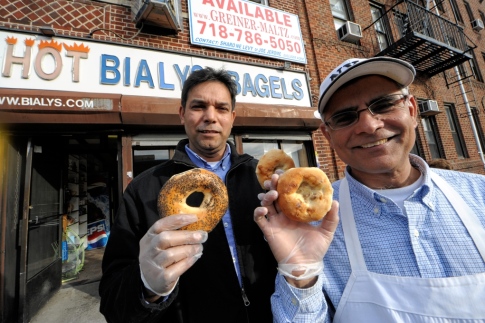 The Forward’s press-hat wearing Gary Shapiro was the first to publish the news; and he was followed by the NY Daily News and NY Post. America’s oldest bialy/bagel retailer has been purchased by a group of South Asian cab drivers. And They are committed to keeping it kosher. After 91 year of operation, the Ross family closed Coney Island Bialys and Bagels, a few weeks ago. Peerzada Shah, and Zafaryab Ali, who used to work at the old bakery, acquired the lease from the Ross’s and have opened a store with a slightly different name and a new floor. As one tabloid shouted, they plan to put the Ali in biALI. The original store was founded by Morris Rosenzweig of Bialystok, Poland.

As many bagel eaters and machers head to Denver for the General Assembly, others are staying put in Philadelphia, Orlando and Boston for some Jewish Film Festivals. The 13th Central Florida Jewish Film Festival in Orlando will headline Restoration and Sholem Aleichem: Laughing in the Darkness by Joseph Dorman. The Boston Jewish Film Festival includes episodes of the Israeli version of the television series, The Office, as well as Restoration; Dolphin Boy; Kaddish for a Friend; Naomi; and Paul Goodman Changed My Life. The BJFF will also screen Standing Silent, a doc on sex abuse in the Baltimore Jewish community. And the Philadelphia Jewish Film series will kick off its 31st season this weekend “My Best Enemy” by Wolfgang Murnberger; Scott Goldstein’s fascinating doc about Las Vegas Sun publisher Hank Greenspun (who used to run guns for the nascent State of Israel); “Little Rose” by Jan Kidawa-Blonski, which is set in 1960s Poland; and “Prisoner of Her Past,” a documentary about Chicago Tribune reporter Howard Reich’s search for the facts behind his mother’s disappearance in World War II Poland. But I would still rather be in Denver.

The San Diego Jewish Journal asks whether it is political chic for the children of politicos to marry Jewish. Chelsea Clinton, Lauren Bush, and Beau Biden each went Jewish. Caroline Kennedy and Sir Paul McCartney did, too. Now we learn that Vice President Joseph Biden’s future son-in-law is a Jewish doctor. Dr Howard Krein (EN&T) is engaged to marry Ashley Biden. 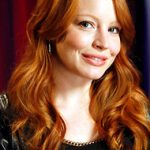 Lauren Ambrose.. Fanny Brice will have to wait

Finally, speaking of funny doctors and Funny Girls, Jewish theatre patrons were saddened to learn this week that the plan to produce a revival of FUNNY GIRL has been cancelled. It was supposed to preview in Los Angeles at the Ahmanson, and make its way to Broadway in April 2012. Was it because Lauren Ambrose was cast in the starring role and she looks nothing like Barbra Streisand? No. New York producers, who needed $12 million to kick off the musical about the life of Fanny Brice, blamed the weak economy for the cancellation. They could open a lot of bialy stores for less.

With no FUNNY GIRL, Equity actors in Texas should attend the following auditions (From Backstage). Allied Theatre Group/Stage West (Fort Worth, TX) is casting New Jerusalemâ€”The Interrogation of Baruch De Spinoza at Talmud Torah Congregation: Amsterdam, July 27, 1656. The play is set in 1656, Amsterdam, where no Jew may speak of religion to any local resident. Baruch Spinoza’s radical beliefs on God and religion draw him into a riveting trial that irrevocably challenges Western thought. The director is Jerry Russell and David Ives is the author. They need a “Abraham Van Valkenburgh” 45, a regent of Amsterdam; Gaspar Rodrigues Ben Israel: approx. 50, a parnas of Talmud Torah; Baruch De Spinoza: 23, a merchant of Amsterdam; Simon De Vries: 23, a painter, 23; Clara Van Den Enden: 20, a music teacher; Rebekah De Spinoza: 26, Baruch’s half-sister. Sorry actors.. the role of Saul Levi Mortera is already cast. EMC points may be received for non-Equity performers. Break a leg. No nudity required.