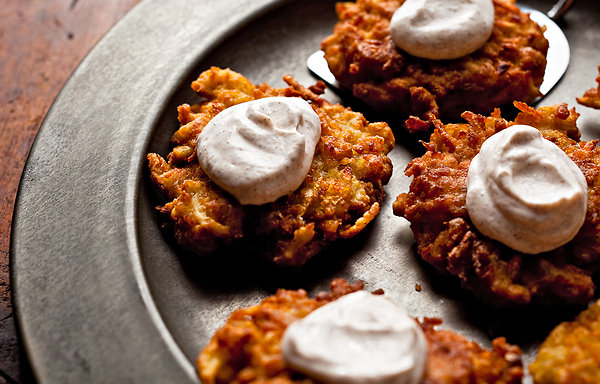 Yes, yes.. hahaha. Once again, publications such as Heeb and The Washington Post are highlighting WHOLE FOODS groceries and their displays of matzos and hams for Hanukkah. Jessica Goldstein of The Washington Post actually surpasses Heeb’s Lara Rabinovich by slamming and haranguing The Whole Foods in Foggy Bottom. Others reported on Chanukah in Santa Monica, which was performed last week by the GMCLA chorus in Los Angeles, and Hanukkah on Ice in South Florida with music by the Maccabeats

But the real story for those of us who ignore the Hasmoneans, Greeks, battles, and civil wars is LATKES.

The New York Times, in its annual report on latkes focused on apple-potato latkes with cinnamon sour cream. Joan Nathan focused on herring. Pickled herring is all the rage in Japan, she wrote, and it is appearing on some of Manhattan’s most expensive prix fixe menus as Herring with wasabi and yuzu kosho paste; and French smoked herring with potatoes. Nathan wrotes that Peter Shelsky, a chef with his own retail store, Shelsky’s Smoked Fish, in upscale “Brownstone Brooklyn” pickles his own herring.

Amanda Sidman of the NY Daily News looked in downtown Manhattan for her latke-madness. She visited the newly opened Kutsher’s TriBeCa restaurant and found several variations. Founded by Zach Kutsher, a fourth generation descendant of the original builders of Kutsher’s Country Club in the Catskills of New York State, and Alan Wilzig, their latke styles included ones topped with pastrami; with melted leeks and mushrooms; with herbed ricotta and mushrooms; and with pastrami salmon and spicy brown honey deli mustard. The NY Daily News’ Patty Lee reported on the Third Annual Latke Festival winners. Dori Fern of Brooklyn received first place. She was inspired by the famed chef, Daniel Boulud’s, version. Her Double Happiness Latkes With Five-Spice Duck Confit mixes duck fat, Chinese style roast duck, and potato latkes. Susan Palmer, a food blogger, received second place with her squash and potato latkes. The NY Daily News, pushed the Hanukkah envelope, and flew to Ireland to report on the Dublin-style latkes. Judith Charry of Great Neck, Long Island, NY is raising her family in Ireland after marrying chazzan and barrister, Carl Nelkin, a member of Dublin’s Jewish community. Her latkes are pretty standard, but her kids might do Irish Gaelic dancing around their Waterford crystal menorah.

In Los Angeles, Phyllis Glazer turned her attention to latkes made of feta cheese and onions. She also recommends orange lentil soup which includes sweet potatoes and carrots, and you can drizzle coconut milk on the soup in the shape of a hanukkiah. . Lentils are an ancient Israel foodstuff; sweet potatoes though are New World. Glazer reminds her LA Southern Californian readers that latkes are Ashkenazi and arrived in Europe only 40 years ago. Therefore she recommends that Sephardic style bumuelos, preferably dipped in various sauces. 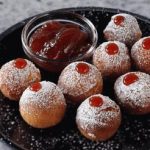 A few miles south, in San Diego, Beverly Levitt of the San Diego U-T, teaches readers about sweet delights and sufganiyot. Levitt worries about the fat, but follows the advice of the host of NPR’s â€œGood Food,â€ Evan Kleiman, who is fond of saying, â€œAll year long, I avoid french fries like the plague. On Hanukkah, I celebrate the miracle of the oil. And love it.â€ Her article includes donut and fillings recipes from Chef Gil Marks. Levitt shares the advice she got from Executive Chef Laura Frankel, who makes 1,000 sufganiyot at the Wolfgang Puck cafe at the Spertus Institute for Jewish studies in Chicago: “Nothing is as much fun as making doughnuts with your children, One person watches the oil, another the pastry bag, and a third is in charge of sprinkling powdered sugar on top.”

While a few miles North, up the coast, Amanda Gold shared her thoughts on sufganiyot with readers of the San Francisco Chronicle. As for the mess and resting with raised dough and deep frying, she writes that she has opted for cake donuts with lemon zest. The Chronicle also highlights a pricy Jonathan Adler dreidel made of acrylic instead of clay, and a keyboard shaped hanukkiah / menorah that spells out the holiday’s name for those Silicon Valley types.

Even further up the coast, in Seattle, Seattle Weekly FoodGeek, Scott Martin Heimendinger, writes that although he was born in Greenwich CT and grew up in a household that celebrated Jewish holidays, and he, himself, does not identify as a member of the Jewish religion, he knows a little about latke preparation. He uses potato flakes to increase the crunchy factor. 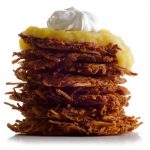 He should head down to Portland Oregon for the 8 Malty Nights Hanukkah Beer, highlighted here on NPR.

Going East along the the border, we hit Toronto and The Globe and Mail. They do not fool around in the North, and they report on twelve recipes for Hanukkah, including ones for chef David Lee’s ultimate brisket; a caffeinated brisket that is made with coffee and chili sauce; doughnut bread pudding: Sweet potato latkes with cumin; and celery root latkes.

Too cold? Let’s head down to Houston, Texas, where the Houston Chronicle reports on Ziggy Gruber â€” owner of Kenny and Ziggy’s â€” Houston’s beloved New York-style delicatessen. They will peel and fry 5,000 pounds of potatoes this week for potato pancakes. Gruber’s advice is â€œEat as much as you can, and enjoy yourself.â€

Some Republican Texans would like to make their new home in Washington DC. The Washington Post is celebrating Hanukkah with recipes, but also with a tastier item, a guest blog post by Edgar M. Bronfman. Bronfman, 80, is the president of The Samuel Bronfman Foundation and is the former CEO of the Seagram Company Ltd. He is currently at work on a book about Jewish peoplehood with the Ruth Andrew Ellenson. It is an amazing blog post (but wrong about Romans) about his first Hanukkah memory of receiving a gift of $5 (Canadian) in 1935. It is also about how his first wife loved Christmas tress and how he kept the tree tradition in his home even up to age 60, when he began a Jewish journey that awakened him to wonders of Judaism.

We can go on and on, but let’s get to the frying. I leave you with the recipes from even a small town, Las Cruces, New Mexico, where the Dreidel House will be selling gifts at the local Farmer’s Market and Israeli musician Yoel Sharabi will be performing Hanukkah songs.