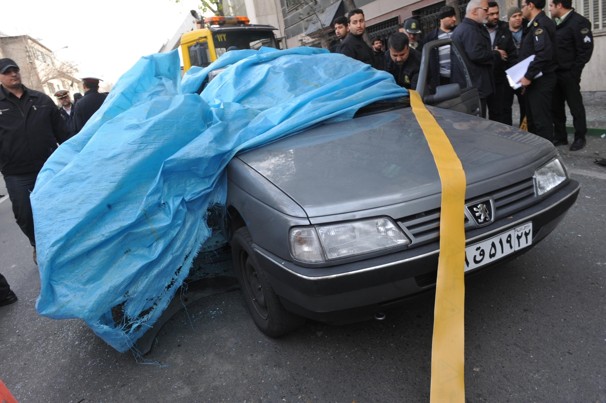 With the fourth nuke scientist bumped-off in the last few years all eyes are pointing to Israel and the USA. But it seems that the Iranian government might be involved in trying to imitate the Mossad and CIA. That’s right. According to some experts, the Iranian regime could be using the spy agency assassination techniques against their own citizens perceived as traitors to the regime.

Of course it is equally probable that a bunch of fearless real spies on motorcycles carried out the attack.

The ethical question about targeted assassination aside – the Iranians are hell-bent on getting a bomb. These scientists are critical leaders in the regime’s efforts.

TEHRAN â€” A scientist linked to Iran’s nuclear program was killed in his car by a bomb-wielding assailant on Wednesday, a bold rush-hour attack that experts say points to a further escalation in a covert campaign targeting the country’s atomic officials and institutions.

The precision hit in a northern Tehran neighborhood killed the 32-year-old chemical engineer employed at Iran’s main uranium-enrichment facility and brought to four the number of Iranian scientists killed by bombs in the past two years. No one asserted responsibility for the bombing, which prompted a swirl of accusations and denials as well as renewed concerns about worsening tensions between Iran and the West.

And this one occurred on the yarhtziet of another scientist:

The killing bore strong resemblance to two 2010 attacks on nuclear scientists and came on the same day as a ceremony for the second anniversary of the killing of another professor, Massoud Ali Mohammadi, in an explosion.