Did Oscars Sell out to Sacha Baron Cohen? 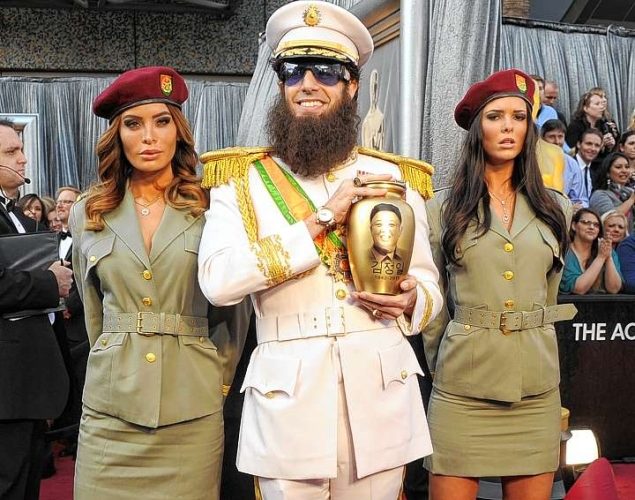 Oh the lengths Hollywood producers will go for dollars and ratings. But you know they say they would sell their own families for a deal, a package, or box office success. An so, earlier this week, Oscar’s producers agreed to let British comedian Sacha Baron Cohen come to the Oscar’s telecast dressed as a “dictator” in order to promote his film, The Dictator. It is scheduled to have a May 2012 release, and will be distributed by Paramount, the distributor of Hugo, one of the multi nominated films.

On Friday, hours before Jewlicious 8.0 kicked off, Cohen issued a video message in the character of the dictator, Admiral General Shabazz Aladeen, that promised to punish the “Academy of Motion Picture Arts and ZIONISTS.” He also wrote that he wished to triumph over the ZIONIST SNAKES OF HOLLYWOOD. I guess this means the Academy voters, the majority of whom are white, old, men.. which is a code word for JEWISH.

All I am saying is.. he went too far with his comedy, and I hope the film fails and sucks, unless of course they advertise on Jewlicious.com. In that case, all is forgiven. Cuz, I, too, would sell my principles for ad revenue and ratings