Ignore Hitler and Draw Something 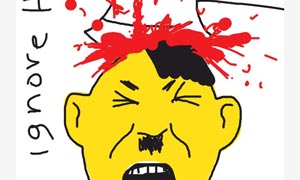 Draw Something is an iPhone and iPad app. The way it works is that you are given a word and then you draw it and then people in your social network guess it. Each correct guess gives you coins that you can use to purchase powerups or you can buy things like more colors and more words. Draw Something went super viral and at its peak it had 14 million users. That’s when Facebook gaming company Zynga stepped in and bought the company for $180 million. But the truth is that after a while the game gets kind of boring and since Zynga’s purchase, the number of users has declined to just over 8 million.

But its not all bad news! Who should come to the rescue but none other than Hitler! Or a Hitler Internet meme actually. See, what you do is when presented with a word, you draw a scene that includes Hitler. Then you add the words “Ignore Hitler” to your drawing and voila! Draw Something is fun again! I tried a couple of Ignore Hitlers. The people I was playing with had not heard about the meme and so they thought I was a little nuts, but whatever. Here they are – they’re not Eli Valley caliber, but in fairness to me and my drawing skills, these took all of about 30 seconds to draw. And they don’t involve cannibalism or anal rape… 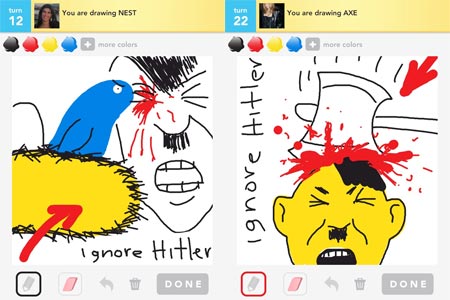 Clearly, my thing is that in every drawing, Hitler gets hurt or maimed. But, you know, what did you expect? In any case, like all good internet meme’s there is a tumblr – ignorehitler.tumblr.com – full of user submissions – the site has over 9000 devotees so far. Is this something for the Anti Defamation League to get upset about? According to Buzzfeed:

The mastermind of it all is a Scotsman named Michael who swears he’s only doing it to make fun of Hitler. (It was good enough for Chaplin.) The inspiration came from Draw Something’s biggest loophole: if you aren’t inspired, there’s nothing to stop you from writing out the name of the object instead of drawing it. That defeats the whole purpose of the game, but it’s become increasingly common as players scramble for coins. “I think, to be as obnoxious as possible back to those people, Ignore Hitler was, in some way, a retort.” Now instead of just drawing a lemon, you have to draw both a lemon, Hitler and some (frequently degrading) scenario in which they might meet. On the plus side, Michael says, “he’s very easy to draw.”

So the answer is no. This is not a job for Abe Foxman. Anyhow, here are a couple more Ignore Hitler’s courtesy of ignorehitler.tumblr.com where you can go to see even more submissions. 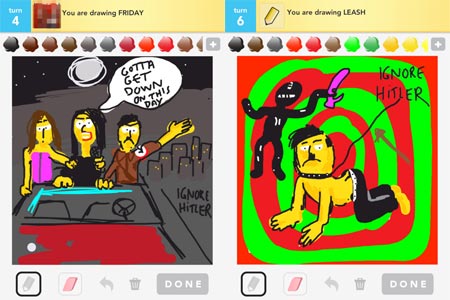 Fun right? And yes, I did not miss the irony of the fact that Draw Something has lost 6 million users since being purchased by Zynga. Just let it go. Hitler was an awful and evil man and the Holocaust stands out as the worst crime committed against humanity ever. Ok? I just can’t pass up any opportunity to make fun of Hitler. Sue me.