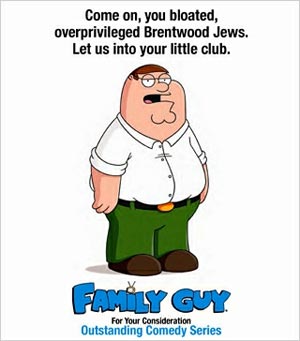 It seems that every year Seth McFarlane and the guys behind the animated comedy, Family Guy, try to pull some kind of outrageous publicity campaign aimed at getting votes for a Best Comedy Series Emmy. It hasn’t worked so far but you have to give them props for trying. Last year they tried to evoke sympathy with a sad baby campaign. In 2010, they sent out fliers that read “Vote for us or you’re racist.” In 2009 they overdubbed a scene in an episode and produced the following ultra violent and inevitably viral video known as Where’s My Emmy?:

This year, as you can see illustrated above, they returned to shock value with a flier that reads “Come on, you bloated, overprivileged Brentwood Jews. Let us into your little club” evoking the common stereotype of Jews running the entertainment industry from their mansions in West LA. E! Online spoke to a number of said Jews who had this to say:

“Wow,” a Brentwood TV producer told The Hollywood Reporter, “if Family Guy was that funny on a regular basis, it might get nominated.” Another producer said, “It’s so heavy-handed. It’s light on funny.” … “While I think Family Guy is a genuinely funny show,” a different television exec exclaimed, “we allâ€”including this ‘Brentwood Jew’â€”need to think twice about this kind of humor. Stereotyping any particular ethnic group is just not cool and can lead others (with the wrong intentions) to feel a certain license to take shots. Surely Seth [MacFarlane] has better stuff than this.”

I’m personally not offended. And I think Seth McFarlane must know a lot about Jews, especially in Brentwood because, well, he’s not so off the mark. Also look at who he works with: David Zuckerman, co-producer of Family Guy and cast members Alex Borstein, Seth Green and Mila Kunis – all Jews! No doubt Abe Foxman is drafting an angry letter as we speak (nothing yet, I checked on ADL.org), but man, can’t we just let it go, just for once? We don’t go nuts when Sacha Baron Cohen or SouthPark make fun of Jews…

What’s truly remarkable though, is how much publicity these sorts of things get. I wonder why that is? Most of the news reports on this story weren’t super critical or offended so it’s not like it’s because Jews run the media. But it seems like every little potential affront to Jews gets tremendous coverage. Or am I mistaken? Anyhow, here’s a nice song that appeared on Family Guy about Jews. Give it a listen, sing along, and contemplate my questions…

Hat tip to sheela the commentator