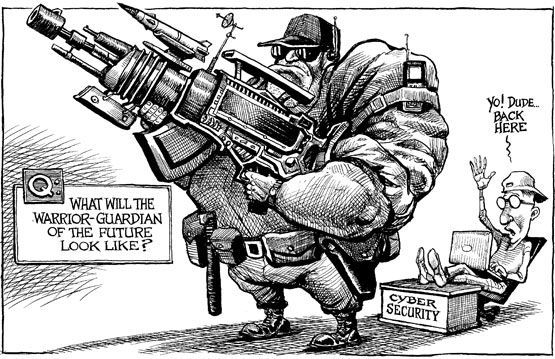 Considered the newest domain in modern warfare, cyberspace has now joined the ranks of traditional areas assessed by militaries all over the world. And this is exactly how cyberspace should be evaluated, since an effective terrorist attack against a nation’s power grid, for example, could result in massive loss of life, crippling damage to infrastructure, and a blow to the economy that could take years to repair.Â Stuxnet has carried out what in the past could only be accomplished by directly bombing a country’s infrastructure or sending in human agents to plant explosives. The Flame virus (which has been circulating for more than five years and has yet to be claimed by an owner, although speculation centers around Israel) has turned the computer into the ultimate spy, gathering data files, turning on PC microphones to record nearby conversations, logging instant messaging chats, taking screen shots, and even remotely changing settings on other computers.Â Explaining the nexus between traditional theatres of land, sea, air, and space, U.S. Defense Secretary Leon E. Panetta has warned that theÂ â€œnext Pearl Harbor we confront could very well be a cyberattack that cripples our power systems, our grid, our security systems, our financial systems.â€

â€œWe have built our future upon a capability that we have not learned how to protect.â€Â – Former CIA Director George J. Tenet

The same computing DNA that produced the communications revolution has also created acute vulnerabilities – – and attractive terror targets – – for societies that depend on cyberspace for national security and economic survival. Back in March of this year, security officials invited members of the Senate to the White House for a classified presentation illustrating what would happen if an enemy state – – or even a talented, lone hacker – – launched a spear phishing attack against New York City’s central computer systems, effectively shutting down the urban center’s electric grid. The simulation was a more simplified version of the Pentagon’s ongoing cyberwar games, presented to Congress to push for a bill that would allow federal control over protecting the computer networks that runÂ America’s most exposedÂ infrastructures.

One of the indirect lessons that can be taken from this simulation presented to the Senate was that cyberwarfare has created a new deterrent posture, a threat reminiscent of mutually assured destruction (MAD). In other words, as one security expert put it,Â if you take out New York, I take out Moscow.Â

â€œThe digital infrastructure we depend on everyÂ day is a strategic national asset, so keeping it secure must be a top nationalÂ priority. Cyberspace is real and so are the risks that come with it.â€Â â€“ Barack Obama

Earlier this week in a feature article inÂ The New York Times, U.S. President Barack Obama publicly announced the joint U.S.-Israeli effort to take out Iran’s nuclear program in a blatant act of cyberwarfare. This is the first time in history that the U.S. has admitted to using cyberweapons to cripple another country’s infrastructure (although there have been a slew of smaller reports of attacks against personal computers used by Al Qaeda operatives). But the launch of the Stuxnet virus â€“ code-named â€œOlympic Gamesâ€ â€“ was on a totally different level of sophistication, and was carried out with deep Israeli involvement, most likely including Israel’s elite signal intelligence corps Unit 8200, led by a Brigadier-General whose name is kept strictly classified.

Despite the apparent rapport between the Israelis and Americans, something is not quite right: an alleged error in the Stuxnet code led to the bug replicating itself across the Internet, threatening to do damage outside the targeted nuclear plants. American officials suspect this was a surreptitious modification carried out by the Israelis for their own uses, and lets just say there are members of the White House that are not too happy about it. (SeeÂ comments by Joe Biden.)

The Israelis are well aware of the zero-sum game involved in the world of cyberwarfare, as evidenced byÂ statementsÂ made today by Israeli Defense Minister Ehud Barak inÂ The Jerusalem Post. Israel plans to become a world leader in the development of cyber capabilities, and to be fair, the chops they’ve shown so far indicate that they might already be there. So, even if the Americans are a little miffed over possible deceptions that took place during the Olympic Games operation, Israel is not a strategic ally that will be tossed aside so easily. The Americans should also keep in mind the extremeÂ and existential threats Israel faces in the region, as well as the multitude of hostile countries it must balance. These factors can at least partially explain the heightened urgency and daring in Israel’s national security decisions. Concerning potential damages, Barak warned:Â â€œCyberwarfare has taken asymmetric warfare to a new height, allowing a lone hacker to cause major damage.â€Â Whether this was referring to Israel’s vulnerabilities, or as a barely veiled threat to its enemies, is unclear.

And yet an obvious question must be asked: Why now? Speculation against the U.S. and Israel over Stuxnet has been around for awhile, but why is Obama making this provocative announcement just now? It could very well be that, despite the real cyber threats Iran faces, the recent declaration of cyber war is a decoy. It forces Iran to shift its resources towards defensive measures surrounding its computer systems, when it might very well be that the next attack is going to be something completely unrelated and even more incapacitating.

The Pressing Questions:Â How will global strategic relations be affected by the shifting power politics connected to cyberwarfare? Should the U.S. legitimize the use of cyberweapons as a covert tool? At what point will cyberwarfare become so destructive that countries will need to consider developing treaties to control its use?

Special Report: Understanding Cyberspace is Key to Defending Against Digital AttacksÂ by The Washington Post

Barak: Israel Working to Become a Cyber LeaderÂ by The Jerusalem Post

Cyber Warfare: Concepts and Strategic TrendsÂ by The Institute of National Security Studies in Tel Aviv