Power Politics at the Presidential Conference 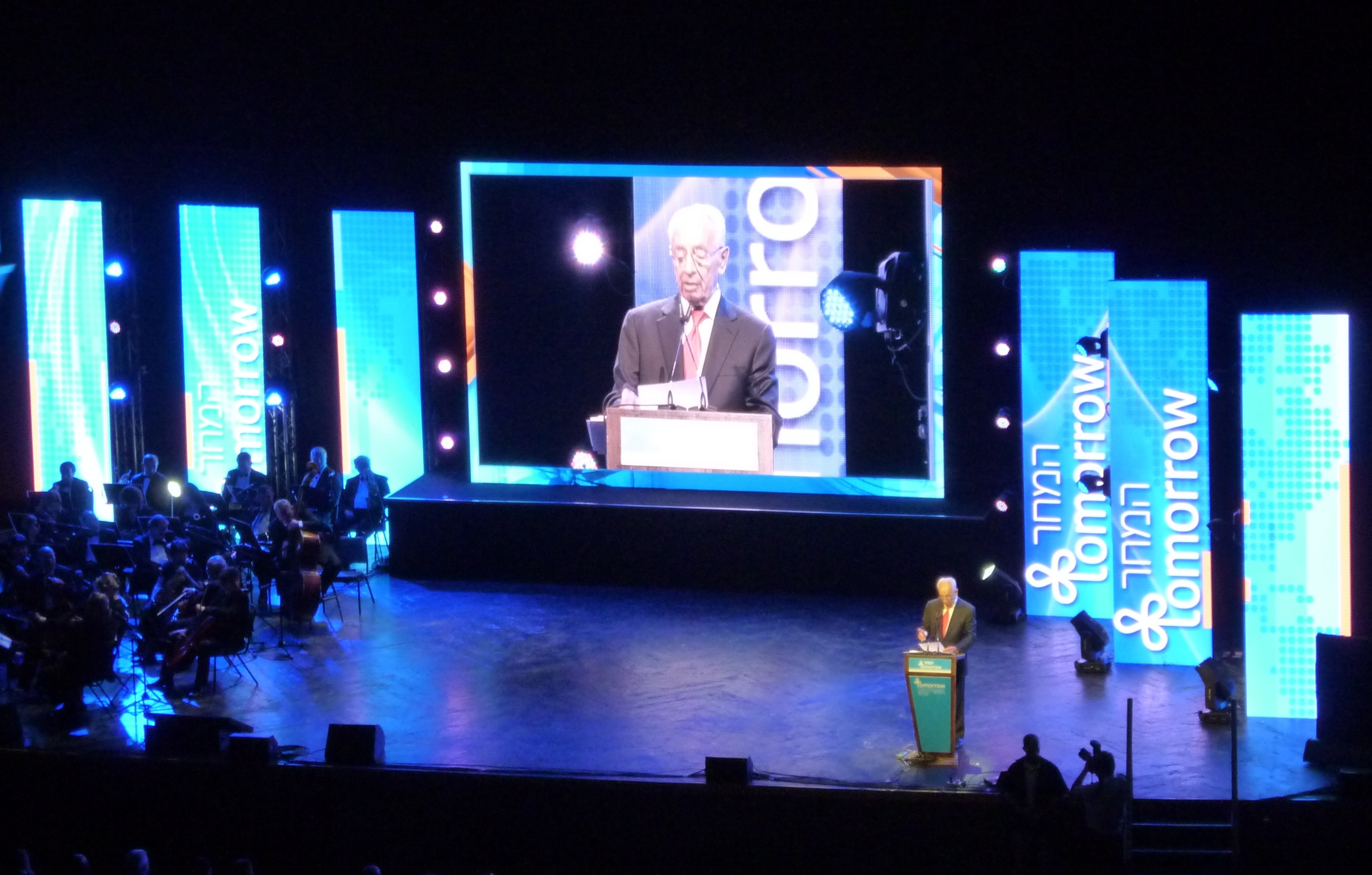 â€œBe careful with authorities, for they do not befriend a person except for their own sake. They appear as friends when they benefit from it, but they do not stand by a person in his time of need.â€ – Chapter 2, Mishna 3, Ethics of Our Fathers

Following the Arab Spring and a year of global economic upheaval, the 2012 Israeli Presidential Conference in Jerusalem was all about the power â€“ who wields it, how they got it, how they plan to keep it, and what this means for Israel and the rest of the world.

In an unrelated article written by Rabbi Dovid Rosenfeld on the Ethics of Our Fathers this week, we are reminded of the Jews’ history of handling power politics: a king or duke would treasure his talented Jewish finance ministers and money lenders â€“ as long as he found them useful in maintaining power. The moment the populace was no longer content, the political climate no longer favorable, or the economy seemingly no longer in need, the Jew’s years of devoted service was quickly forgotten and he would soon find his business (as well as his home) up in smoke. Throughout this history of exile, Jewish communities have regularly been uprooted and forced to start over in foreign locations with little to no resources.

The result: a nation that must be fast on its feet, has learned to improvise in the most daring of ways, and has maintained its own qualitative edge by fostering friendships in every corner.

Survival is the name of the game, and naÃ¯vetÃ© is fatal.

The first plenary session at the Jerusalem International Conference Center opened with an inspirational â€œno pain, no gainâ€ speech by world champion paralympic swimmer Keren Leibovitch. At the age of eighteen, her back was badly injured in an accident that left her paralyzed from the waist down. She returned to swimming as part of her rehabilitation, and eventually went on to win gold medals and break world records. She suffered many difficulties and setbacks over the years, but in Leibovitch’s view one cannot truly appreciate victory unless he has first survived the challenges.

â€œPlease don’t be afraid of failing,â€ she urged the audience. â€œIt’s the one and only way to succeed.â€

President Shimon Peres, the grand host of the evening, then took the stage to present former U.S. Secretary of State Henry Kissinger with the Presidential Award. Kissinger, who met Peres back in 1962 and has since supported Israel throughout its turbulent history, referred to the country as â€œan island of stability and domestic cohesion in a moment of upheaval everywhere else. . .There must be equilibrium, so that the strong cannot dominate the weak.â€

This concept is more pressing than ever facing the consequences of the Arab Spring, and the dust has yet to settle. Although the Arab Spring was the topic du jour, the conference actually holds a wide variety of panels â€“ from technological evolutions to the latest developments in medicine to ancient identity dilemmas. As a young American-Israeli who works in the security field, I was pretty psyched for the panels related to national defense policy. (To read last year’s article I wrote on the event, admittedly a little more obnoxious, read “Baby’s First Presidential Conference”.)

As usual, the conference attracted renown speakers from an assortment of countries and backgrounds. In a panel titled â€œThe Arab Spring Tomorrow: Its Roads and its Tollsâ€, Meir Dagan (former chief of the Mossad) joined U.S. Ambassador Dennis Ross, Turkish political commentator Mustafa Akyol, Egyptian Strategy Advisor Sherif El Diwany, and Jordanian journalist and communications strategist Salameh Nematt to discuss the responsibilities and implications of power in the aftermath of the Arab Spring.

Excuse my French, but the foreign panelists served Israel quite a few s**t sandwiches. Their expertly articulated formulas were rather similar and tended to sound like this: â€œIsrael, you are a great country that deserves respect, but . . . Basically, (a) every problem in the Middle East can somehow be traced back to you guys, (b) it’s your fault there isn’t peace with the Palestinians, and (c) it’s about time you people offered up a real conciliatory initiative that makes everyone happy . . . And by the way, Israel, we think you’re a great country. Thank you so much for inviting us to your conference.â€

This â€œsandwichâ€ formula seemed to have its intended effect, which was wide applause from the audience who seemed to digest the slices of bread without paying attention to what was served inside the sandwich. I doubt the sentiment went unnoticed by Dagan, but I’m guessing after several years of working in counterterrorism in the most aggravating region of the planet there is very little that fazes the man at this point.

After Diwany accused Israel of basing its strategic policies purely on â€œparanoiaâ€ vis-Ã -vis growing Islamist power in the region (because, you know, the Muslim Brotherhood and the Arab world in general are only full of love and joy for the Jewish state), Dagan calmly held his ground, acknowledging that Israel has a right to be concerned if Islamist parties with a radical agenda take power, as should the rest of the civilized world. Utilizing the sandwich technique just as artfully, Dagan amicably concluded that a â€œrange of mutual interests that require regional cooperation provide an incredible opportunity for fostering peaceful relations.â€ Very good, sir. 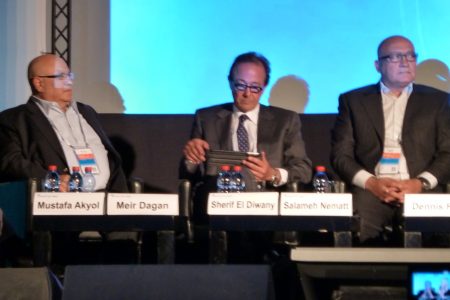 I had the pleasure of an impromptu lunch with Mr. Cordesman the day before, and was eager to hear him speak on the panel. I read his works on asymmetric warfare in the Middle East throughout graduate school and have always admired his pragmatic thinking and range of knowledge in the field.

His main contribution to the conference panel pretty much summed up the reality of the strategic calculus in the region: although sympathetic to Israel, he pointed out that the Israelis and Americans would not always have identical interests. U.S. strategic considerations span the entire globe, focusing on economics and energy resources at the moment, and other countries must coordinate themselves accordingly if they want to maintain beneficial relations. It wasn’t unfriendly; it was just the plain truth of power politics. And at the end of the day, countries will do what is best for their own people. Family comes first.

I must also say that I truly enjoyed watching Cordesman maneuver his way through Israeli social interactions. In Jewish/Israeli culture, interrupting each other every five seconds is the norm, but it was pretty obvious to me after a short interface that this was definitely not Cordesman’s cup of tea. After being interrupted several times by the Israeli panelists, Cordesman shut them down with a steely, â€œFirst of all, don’t interrupt me. Second of all, if you are going to interrupt me, at least say something intelligent.” And, let me to tell you, that was the last time anyone interrupted the guy during the panel.

(Sorry, but as a dual citizen maneuvering between both cultures myself, witnessing that exchange just totally cracked me up.) 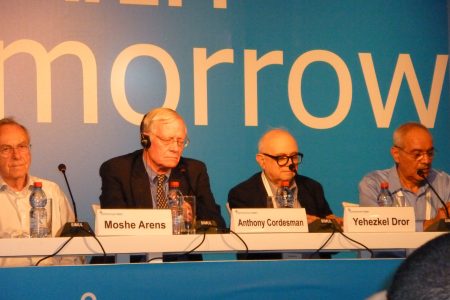 Cordesman: “Do NOT interrupt me.”

As Cordesman demonstrated, this is a tough world we live in and you have to stand up for your rights. We have faced many challenges as a people, and just as Keren Leibovitch pointed out, overcoming our challenges and setbacks is what makes success taste so sweet. Israel has bloomed into a country that not only serves as the dynamic home of one of the longest surviving nations on the planet, but as Peres put forth, seeks to â€œaddress solutions that will lead to a better tomorrow for the State of Israel, the Jewish people, and all of humanity.â€

And so, our contributions will continue.