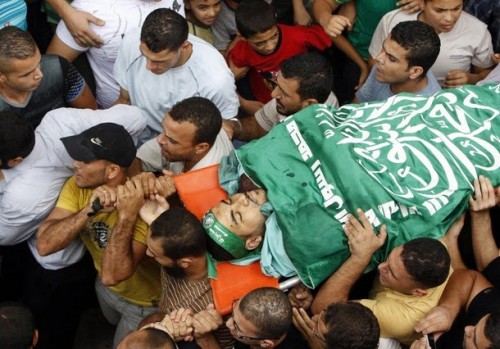 Less than 24 hours ago, Hamas senior operative Kamal Ranaja was found assassinated in his home in the Syrian capital of Damascus. Hussein Murtada, director of Iran’s al-Alam TV station,Â says the armed group that eliminated RanajaÂ also burned his house so as not to leave traces after stealing documents from the scene. Hamas immediately pointed fingers at the Israeli intelligence agency Mossad, but Defense Minister Ehud Barak refuses to confirm or deny Israeli involvement, claiming that a number of actors were interested in seeing the former aide to Mahmoud al-Mabhouh (assassinated by Israeli agents back in 2010) turned to toast.

Just in case you were wondering, Barak pointed out that Ranaja wasÂ “not a saint”. To be fair, Ranaja was reportedly orchestrating the logistics of weapons smuggling from Iran, Lebanon, and Syria into the Gaza Strip. Such activities do not generally make one popular with the Israelis, although it still remains unclear at this point who was behind the hit.

This recent incident provokes interesting discussion over the assassination policies of intelligence agencies. In anÂ articleÂ examining the evolution of Israeli assassination policy byÂ Infinity JournalÂ co-founder Adam Stahl, the history of the country’s targeted operations began as early as the 1920s, when Arab and British hostility against the Jewish population began to intensify. Jewish underground militias at the time responded with a series of assassinations as defensive and deterrent maneuvers. Over the years, Israel Â developed a process of legalization of targeted killings as part of a progressively expanded counterterrorism tactic, especially leading up to the outbreak of the Al-Aqsa Intifada in 2000. Following this wave of violence against the Israeli civilian population, the targets, techniques, and frequency of targeted attacks continued to develop across the Israeli security community under the more sterile name of “focused preventions”. Documents drawn up by the Shin Bet and military intelligence think-tank teams justified assassination as a tool of self-defense, designed to stop a terrorist attack that has already entered the execution stage.

On the U.S. side, the assassination debate has centered mainly on the increased use of drones. The Obama administration’s employment of drones is approximately five times larger than it was during the Bush era. This number might seem large, but considering that the Americans are now dealing with a proliferation of terrorist threats spread out across Afghanistan, Pakistan, Yemen, Somalia, the Horn of Africa, not to mention a series of remote yet explosive tribal areas, the increase seems proportional to the threat. Yet, Obama’s foreign-policy doctrine of multilateralism and transparency is now under fire by popular American debate. Is a policy of assassination undermining an overall strategy?

In most cases, assassinations are Â an issue of international affairs, as they usually involve attacks on the territory of another sovereign state. Using force in this arena is not only risky, but always controversial. Security agencies are obligated to defend their citizens, and sometimes the use of a targeted killing tactic is necessary, but such maneuvers must be executed meticulously so as to not cause an unwanted escalatory scenario. Many a critic has referred to assassinations as “unethical”, but the only unethical action you can take in warfare is the failure to act in the best interest of your people.

The Evolution of Israeli Targeted OperationsÂ by Studies in Conflict & Terrorism

Responses to Terrorism: Targeted Killings is a Necessary OptionÂ by The San Francisco Chronicle

In Defense of DronesÂ by The National Interest