The State of the Jews: Upstairs – “I love JDate” 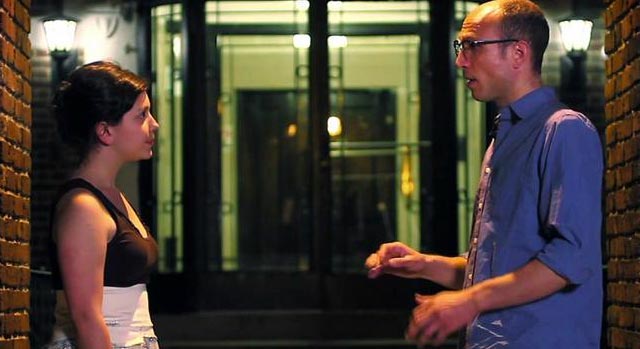 What do you get when you combine “The New Girl,” “Girls” some New York Jews and a viral video? Well apparently a deal for a television show with Fox. That’s what happened to Shawn Wines in the aftermath of the viral Video success of his not quite safe for work “Upstairs.”

The project, which is apparently being described as a male “New Girl,” is about an average young man who lives with a trust-fund kid roommate across the hall from a beautiful woman, and will look at how he and his friends deal with life in New York. The short below looks closer to a cross between “Louie” and “Girls,” with a couple getting a little too honest about how their relationship will go as they negotiate on the stairs of the guy’s apartment after a date… The 28-year-old Wines’ Columbia film school graduate thesis short “High Maintenance” won a silver medal at the Student Academy Awards in 2011. He’ll write and co-executive produce “Upstairs,” with [Aaron] Kaplan (“Terra Nova,” “GCB”) executive producing.

I am of course more interested in what this says about the state of the Jews today. I’m not quite sure what the message is, and while it’s clearly funny, it can’t be very good for the Jews. I guess we’ll see when the show comes out! Stay tuned – and yes, Like Girls creator Lena Dunham, you should probably expect Wines in next year’s Forward 50. I called it first.