My Trip to Bountiful 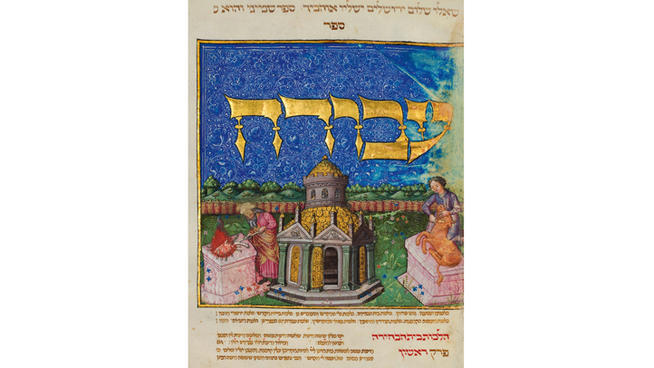 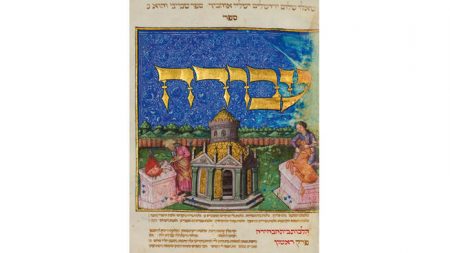 An illuminated page from the Mishna to be auctioned

Indulge me. My narcisstic blog of my average Sunday in NYC. Sunday began with a trip to a morning minyan, where I learned that a nonagenarian member of the minyan had passed away. I knew her as an older woman with a list of names that she would read from during a prayer for healing. Never did I know that Leah Schaefer, had been a singer, earned her doctorate from Columbia, and was a famous pioneer in the field of sexual therapy.

After the ending psalm, I visited a gym where I got out-jazzercised and trounced by two women in their 70s. Oh, am I ever out of shape.

But the highlight of my day was going to be a visit to Sotheby’s on the Upper East Side of Manhattan in order to see pre-auction pieces from the antique Judaica collections of Michael and Judy Steinhardt, most notably hundreds of their antique tzedakah boxes in various shapes. A Treasured Legacy: The Michael & Judy Steinhardt Judaica Collection will be auctioned on April 29, 2013, in New York, but will visit Moscow and Jerusalem over the next few weeks.

I arrived at Sotheby’s an hour too early; the gallery wouldn’t open until 1 P.M. I wasted time by walking through the neighborhood, warming up in an ATM lobby and finally popping into a newly opened coffee bar that seated a dozen people. As I walked in, a man exited. He happened to be one of the nation’s top cancer researchers. Sitting down with a coffee, two older gentleman engaged me in conversation. One was a healer, steeped in the methods of Hawaiian Kahuna’s (or Kuhan’eem, I assume). The other was an expert in licensing. For more than an hour, he regaled with stories of the forthcoming licensing deals for Downton Abbey and Fifty Shades of Grey (you know, like grey shaded neckties, apparel and book-themed sex toys), and filled me in on the revenue prospects of Boo, a shaved Pomeranian from California. I had never heard of the six year old dog, but it turns out he has millions of fans and 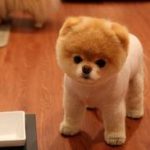 is the spokesdog for Virgin America.

Having nearly exhausted the topic of licenses, I ran to Sotheby’s, only to discover that the exhibit only had about a dozen “highlights” from the collection: silver for Torahs, two antique kettubot, and a silver tray from London. The Frankfurt Mishneh Torah Books 7-14, circa 1460, was not on view (auction estimate is over $4.5 million). Books 1-5 are owned by The Vatican. Also not on view was a North German Bronze Lion Aquamanile from the late-12th century (auction estimated $200-400,000) which was used for holding the water used to wash one’s hands. It is one of only four known to exist from the Medieval period. 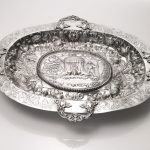 a silver tray from London

On view was a rare King George I Silver “Lord Mayor’s Dish” from 1719. Expected to sell for over $500,000, it is one of the trays that the Bevis Marks Synagogue presented to the Lord Mayor of London between 1679 and 1778 as a symbol of thanks for offering London’s Jewish community freedom. 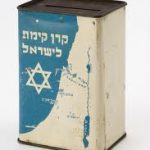 The Steinhardt’s began collecting the pieces three decades ago. At first they collected some tzedaka boxes but discovered that they were not as old as some seller had told them they were. But over time he learned how to pick the good stuff. Being that the collection has an auction estimate of $11 Million, there isn’t much “junk.” (My charity box is pictured at right)

Alas, I will have to wait until the auction to share the stories of some of the charity boxes with you.

On the way out, I noticed a small exhibit of items that were recently found in the Jewish Ghetto of Venice. Venetian Heritage has restored many of the pieces. Among the pieces in that collection are an illuminated Scroll of Esther with Accompanying Blessing Sheet (will set you back an estimated $600-$800,000). I liked these creative wall-mounted Hanukkiah more though. 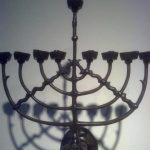 Ah.. and that was just an average Sunday afternoon, capped off only by GIRLS on HBO and Season 3 of Downton Abbey.