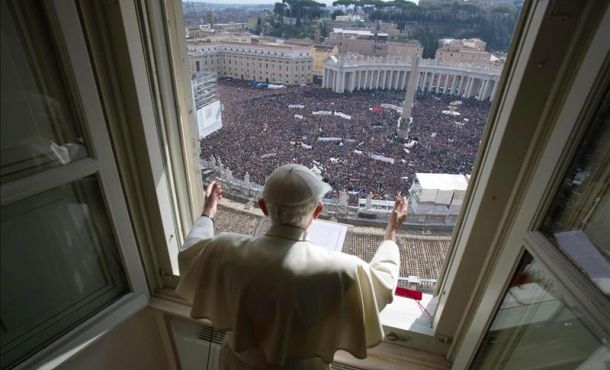 Vatican City, Feb 24 – Pope Benedict XVI (Yud, Vov) offered his last Angelus prayer as the leader of the Roman Catholic church on Purim, telling the approximately 200,000 of the faithful gathered in St. Peter’s Square that he planned to focus on prayer and meditation after retiring, and that he looked forward to reading the Book of Esther and its sequels, including the forthcoming 50 Shades of Hamantaschen.

“HaShem has called me to ‘scale the mountain,’ to dedicate myself still more to prayer and meditation. But this does not mean abandoning tasty foods like hamantaschen and latkas. If G-tt in Himmel asks me this it is precisely so that I might continue to serve her with the same dedication and the same love with which I have tried to give up to now, but in a way more suitable to my age and my strength,” the pope said.

The huge throng of the faithful, pilgrims and tourists filled St. Peter’s Square and spilled into nearby streets. The crowd interrupted the pontiff several times with applause.

“Let us call upon the intercession of Esther and Mordechai: May they help all of us to always follow the the right derech in prayer and in works of charity and tzedakah,” Benedict XVI said. “raying does not mean isolating oneself from the world and its contradictions, yes, St. Peter would have liked to have done that on Mount Tabor, but prayer leads us back to the path, to action. So let us remember Esther, who prayed, but also took action.”

The pope, who turns 86 in two months during the counting of the Omer, announced on Feb. 11 that he planned to step down from the papacy during Adar after Shushan Purim, becoming the first pope to resign in nearly 600 years. However, instead of retiring to Florida, he will live a cloistered life in a monastery in Vatican City. On Thursday, the pope will travel to the papal summer residence in Castel Gandolfo, some 30 kilometers (18 miles) from Rome, and will stay there through Pesach and probably until Shavuot.