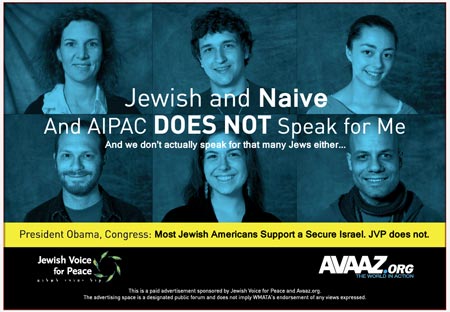 I woke up this morning and received a breathless email from Cecilie Surasky, the Deputy Director of “Jewish Voices for Peace.” The email gleefully announced that in anticipation of the AIPAC Policy Conference in DC and the arrival of thousands of Israel activists from across the US, JVP arranged for the placement of 100 large back-lit ads to be plastered across the busiest Metro stations in Washington, D.C. The ads read as follows “Jewish and proud and AIPAC doesn’t speak for me – President Obama and Congress: Most Jewish Americans are pro-peace. AIPAC is not.” The email then urges JVP’s “legions” of followers to flood the White House and Congress with this message.

This pisses me off a bit, because I wholeheartedly support peace in Israel and in the Middle East and I can tell you, without any hesitation, that “Jewish Voices for Peace” does absolutely not speak in my name or, as they imply, in the names of the many American Jews that also support peace in Israel. For instance, JVP claims in their mission statement to be “a diverse and democratic community of activists inspired by Jewish tradition to work together for peace, social justice, and human rights [to] support the aspirations of Israelis and Palestinians for security and self-determination.” But there is nothing in Jewish tradition that says that you have to endanger your physical integrity when faced with a foe who declares the intention to, you know, kill you and stuff. In fact Jewish tradition insists that you must kill someone who rises to kill you- to not do so is a sin. Judaism is many things, but it’s definitely not a pacifist religion…

JVP claims to support the aspirations of both Israelis and Palestinians but in the JVP world view, the Israelis are always wrong while the Palestinians can do no wrong. They support BDS, the Security barrier around the West Bank is a severe human-rights violation, but no mention is made of the horrific terrorist attacks it has prevented. They “will not quietly witness the violation of human rights in Palestine” but they will stand mute at the violation of human rights by Palestinians.

By ignoring the context of the conflict, JVP necessarily demonizes Israel and infantilizes the palestinians. Thats what happens when you blame Israel for everything and treat the Palestinians like some kind of retarded appendage with no mind of their own, incapable of formulating the minimum level of willful behavior necessary to attach any kind of culpability whatsoever. So yeah, screw you JVP. You don’t speak for me and from what I can tell, you don’t speak for hardly any Jews at all except for the disaffected whack jobs at your rallies who seem to have lost a couple of their marbles.

Anyway, I rejigged their sign in Photoshop as you can see below. Click here to download a larger version that you can print and stick on any wall anywhere like say… Madison Square Garden or the Taj Mahal or the Washington DC Subway… those are just some random suggestions. In all cases do not break any laws or deface public or private property when putting up my version of the JVC poster.