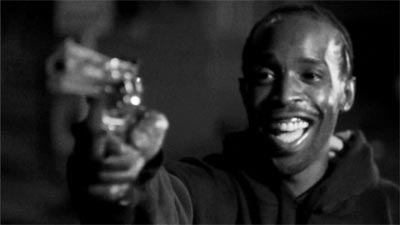 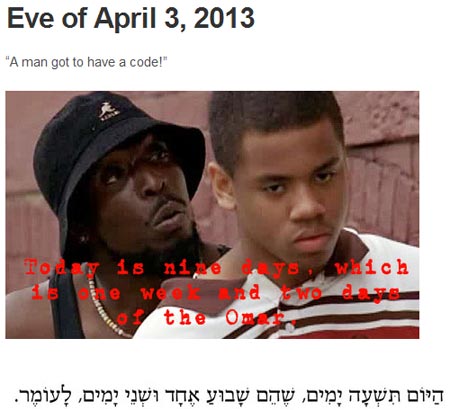 The Counting of the Omer is a verbal counting of each of the forty-nine days between Passover and Shavuot (that’s that High holiday in the Summer that you’ve probably never celebrated, or heard of). The Counting of the Omer begins on the second day of Passover and ends the day before that Shavuot holiday. This counting originates in the Torah commandment to count 49 days from the day on which the “Omer” sacrifice was offered until the day before the Shavuot sacrifice was offered, both at the Temple in Jerusalem. The counting is supposed to represent the anticipation we felt at the prospect of receiving the Torah, which Shavuot commemorates. The first 34 days are also a period of mourning to commemorate the deaths of 24,000 of Rabbi Akiva’s students via divine plague caused by their lack of respect toward others.

Omar aka Omar Little is a character in the HBO television crime drama series The Wire. Spanning 60 episodes from 2002 to 2008, it is considered by many critics to be one of the greatest TV dramas of all time. Omar played a principled stick-up man, fearlessly robbing only drug dealers. He was also gay, avoided cussing and definitely the most memorable character in the show. He was cunning, brave and feared. Whenever he would show up with his trademark facial scar, long coat and large caliber shotgun or revolver, everyone would run while yelling “Omar’s coming! Omar’s coming!”

Counting The Omar is what you get when you combine the counting of the Omer and Omar. Is there any connection between the two other than similar spelling? No. Does it matter? I guess not. Whatever keeps you current on this age old tradition is fine I suppose. Tonight is the 5th day of the Omer by the way. In case you were wondering. I bet you weren’t though.