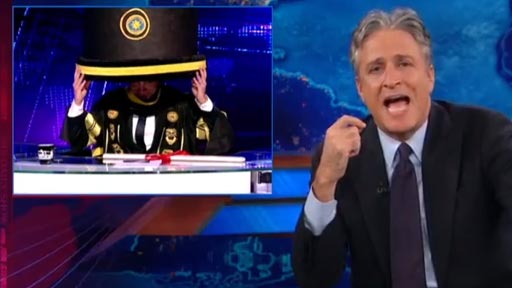 TV Host Bassem Youssef, considered the Jon Stewart of Egypt, was arrested last weekend on charges of “insulting Islam” and “belittling” President Mohamed Morsi. Thus it comes as no surprise that Jon Stewart would weigh in on this incident – and weigh in he did with a monologue that was funny, scathing and highly personal. He didn’t just poke fun at Morsi, he dedicated 11 minutes of his show where he wondered why the President, who was elected as a result the Arab Spring, would do such a short sighted and undemocratic thing when the last thing Egypt needs is bad international publicity. Their economy is falling apart, tourism is plummeting, women are getting raped on the street, the county’s infrastructure is crumbling – why arrest a popular political satirist? Shouldn’t the President of Egypt busy himself with more important stuff?

But that’s not all! Bassem Youssef, after being arrested, interrogated and released on bail, was charged on Tuesday with the crime of insulting Pakistan. Apparently that is in fact a crime in Egypt… and on top of it all, this sparked a diplomatic row when the US Embassy in Cairo tweeted a link to the Daily Show segment. The tweet has since been removed probably as a result of The Egyptian President’s twitter account expressing its disapproval:

.@usembassycairo @thedailyshow @drbassemyoussef It’s inappropriate for a diplomatic mission to engage in such negative political propaganda

Whoever is running the Embassy’s Twitter account sure is being kept busy though! the NYTs – Egyptian paper Al Fajr who apparently often just pull stuff right out of their asses recently reported that American ambassador Anne Patterson had said: â€œThe land of Egypt belongs to the Jews because it is originally their landâ€¦ and the Jews were expelled from Egypt after they built the Pyramidsâ€¦ and after D.N.A. analysis of Tutankhamen he was found to be of Jewish origin.â€

.@marwamfarid This is completely false. Amb never even spoke with that newspaper.

Duh. Man, what’s going on Egypt? You guys ok or have you totally lost it?