Dude, Where’s My Chutzpah? Everything you need to know about Jewish Peoplehood in 11 fun episodes 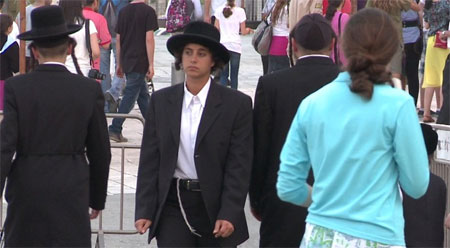 Six Points LA (not the one that folded) Fellow Jessie Kahnweiler’s Web series “Dude, Where’s My Chutzpah” has the following premise: Jessie’s Bubbie passed away and left her a surprise legacy that she can claim if she lives Jewish for a year. This plays out over the course of 11 episodes and follows Jessie from meetings with Rabbis, other Jews, an interfaith relationship, the Holocaust and Israel. Jessie was formally brought up Reform, is possessed of a Sephardic heritage and is effectively secular and unaffiliated. In other words, she represents the most desired demographic that gets the organized Jewish community in a tizzy. Turning these people on to Judaism and Jewish affiliation is the holy grail that will save the grand Jewish edifices from being overwhelmed by Orthodox Jews and keep the institutions of Jewish life under the control of “our crowd” type folks. Jewish, but not too Jewish. Jessie just wanted to make a Jewy Web series that was ostensibly Jewish but she seems to have unwittingly wandered into a veritable minefield.

I talked to Jessie about this and other stuff, and, as always, she was a hoot. I’ve met Jessie at Shabbat tables and at the Jewlicious Festival and I expected no less:

CK: Tell me a little about yourself. Where are you from and how you come to create DWMC?

I played dress up till I was 16. Ha no just kidding.. I still play dress up. I’ve been making movies as long as I could talk (I started an open mic from inside my mom’s womb, those were the days) In grew up in the ATL blasting Outkast in the suburbs, wore braces until like yesterday, and played lacrosse or at least wore the mouth guard. People, and by people I mean my friends, used to throw pennies at me because I was Jewish, and I laughed right along with them. Not sure what that all means still trying to work all this out with my therapist, I’ll get back to you…

I moved to LA and worked on big hollywood movies getting coffee for people whose dogs ate better than me. Then about 2 years ago I was stoked to get a 6 points fellowship allowing me to make a film about anything I wanted, as long as it was Jewish. Of course I freaked out because, like most Jews my age, the only thing I knew about being Jewish was eating bagels and having thick leg hair. Thus my insane quest to do Judaism MY way AKA “Dude,Where’s my Chutzpah?” was born. Needless to say, it’s been one hell of a ride…

CK: I know the premise of your video series, but really, it’s about what it means to be a Jew today. It’s about the meaning of Jewish peoplehood and it’s done by you, an unaffiliated young Jew – exactly the target demographic that the organized Jewish community is all stressed out about. So you’re basically an icon – the voice of a generation. Seriously?? You??? How do you feel about that?

Sorry I can’t hear you, I’m eating bacon off my goy boyfriend’s uncircumcised….

I’m really just trying to be “in it” right now. All that labeling would be better put to use in my online dating profile. This journey has been really liberating, chaotic, weird, scary, stupid, and frustrating, and a zillion other things I can’t even comprehend yet but at the end of the day it’s SO much cooler than eating Lean Cuisine waiting for my life to start.

CK: You cover all the burning issues of contemporary Judaism – from religion, the Holocaust, Interfaith relationships, Israel etc. How compelling is all this to you? I mean above and beyond your responsibilities to the 6 Points Fellowship and all. What’s the expected takeaway from DWMC?

The topics I covered in the series are directly inspired by the research I did for over a year before I began filming. You can’t talk about music, you have to turn down the car windows on a sticky summer night and blast that shit. I had to authentically expose myself to all the ways people manifest Judaism and basically see what stuck. The topics that really turned me off or freaked me out most often led to the most intense and meaningful experiences. My arc in the series, from apathy to interest, mirrors the arc in my life. How do I give a shit about something? I look at the people behind the politics and then wait for the miracles to happen.

This journey has shown me that being a Jew means asking questions that have no answers, getting dirty, falling on your ass and jumping up to beg for more. I’m a jewish sephardic girl so i’ve always had chest hair but this journey def made me grow a few more.

CK: In Israel you went to the Kotel dressed as a Haredi man, you went to Billin and flirted with both the activists and the soldiers, you went to Machaneh Yehuda and bought a watermelon then in Meah Shearim you stuck the watermelon under your shirt to pretend you were pregnant. That’s provocative and funny but what is that supposed to say to your viewer about being Jewish?

My series never tells the viewer HOW to feel or preach about what it means to be a “good” Jew. It’s about my process trying to answer these questions. As a filmmaker I don’t have want to have a soapbox, I want to make an awesome bubble bath and if you want to get in with me well that’s up to you. As for the provocative issue, I’m not trying to disrespect people (I’m not going to Meah Shearim in a yellow polka dot bikini) It’s not about drawing a REACTION but rather my ACTION in trying to digest Jewish ideology through experience. Jews have a rich history of using humor to embrace controversial and taboo issues. We don’t ignore the elephant in the room we hoist him on a chair and dance till the sun comes up. I’m not inventing the wheel dude, It’s when I stand on the shoulders of these provocative giants that I couldn’t be prouder to call myself a Jew.

CK: I mean seriously. The Jewish community has invested a lot in you. Reams and reams of papers and studies have been written about Jewish Peoplehood and how to make it compelling to young Jews. Who do you think is going to continue to maintain Jewish institutions and organizations?

If you want to inspire young people to authentically embrace Judaism you have to let them find it for themselves. Are you going to date the boy your mom sets you up with or the stranger on the bus who magically appeared and helped you with your groceries? I am so grateful to be part of the 6 Points Fellowship because it allowed me to use my obsession with film making to find my Jewish identity. So yeah basically have more stuff like 6 Points. Like 6 million points.

CK: Do you think that you’ll marry a Jew? And if so do you foresee being more actively involved in more Jewy stuff?

I want to marry a Mensch but he doesn’t have to be Jewish. I’m excited about the future of my jEWyness beyond this project however that takes shape.

CK: I watched all 11 videos and I just have more questions than answers.

Good! That’s the point…now get off your ass and go find YOUR answers…

CK: What are you gonna tell the old folks when you inevitably present these videos on the road at Federations and Tribefest and stuff? What’s the takeaway from all this? Is there hope or is your predominantly secular, mostly apathetic about Judaism generation fucked? Is Jewish continuity something that y’all are just going to leave to the Orthodox?

I can’t speak for any other JewFro but mine but I don’t think Judaism is fucked. It’s not like the dusty Piano that sits in the parlor that no one ever plays anymore. It’s a living breathing thing and like all shit with a pulse it’s going to ebb and flow and come together and fall apart. Whenever we can predict EXACTLY what’s going to happen to the future of Judaism then we know it has really died. I DO know that neurotically worrying about Judaism’s future is def not a fuckin’ mitzvah.

Well that there’s food for thought. Whether you agree or disagree with Jess, you can’t deny that the reality of Jess is messy and complex and doesn’t always correspond to what we want it to be, but it is indeed the unvarnished, real thing. And frankly? I’d rather watch 110 episodes of DWMC than even one dry and uninspiring paper on Jewish peoplehood written by the usual suspects (Sorry Dan, nothing personal).