Much Scratch to be Spent on Monica Lewinsky’s Stuff 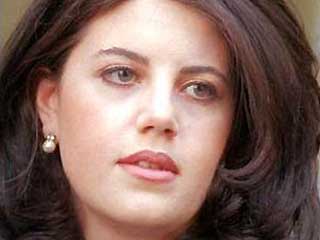 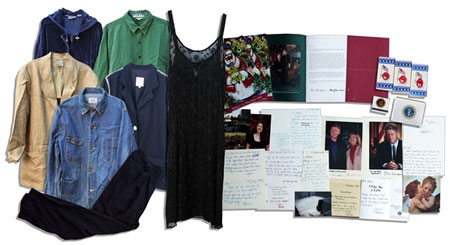 Ah Monica Lewinsky. Back in 1998, news of a dalliance between then President Clinton and White House Intern Monica Lewinsky shocked a nation. Lewinsky confided in her friend Linda Tripp who then recorded their conversations and released the tapes to Special Prosecutor Kenneth Starr. What came to light was the commission of 9 sexual acts over a two-year period including the placement of a cigar tube in a place where cigar tubes don’t usually go, and the uh… placement of some of President Clinton’s vital fluids on an infamous blue dress purchased from the Gap.

Linda Tripp now runs an all year Christmas shop in Virginia and Kenneth Starr is the president of Baylor University in Waco, Texas. Lewinsky earned a master’s degree in social psychology from the London School of Economics and continues to reside in London where she works hard to avoid publicity. 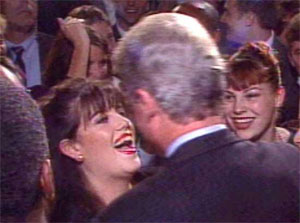 Prior to her relationship with Clinton, Lewinsky had an extramarital affair with Andy Bleiler, her married former high school drama instructor. After the affair ended she maintained a friendship with Bleiler and his wife and she sent them mementos of her life in DC as well as some random items of clothing. These mementos, now in possession of Bleiler’s ex-wife are up for auction. This treasure trove of sordid swag and stuff includes more than thirty items that federal investigator Kenneth Starr examined while gathering evidence for the impeachment case against former President Bill Clinton. Up for bids is a negligee that belonged to Lewinsky, White House keepsakes, greeting cards and several other articles of clothing. Lewinsky’s infamous blue dress, however, is not included in the collection – which is unfortunate because I’m sure it could have uh… generated uh… gobs and gobs of uh… cash. As it stands the auction is expected to fetch about $50,000 which I suppose is a nice little payback for Kate Nason, the cheated on wife of Andy Bleiler.

I have no idea what kind of nutbar would spend that kind of money on Clinton era artefacts but at last week’s Presidential conference attended by Bill Clinton, I did manage to get a hold of a napkin used by the former President to wipe his mouth and face. I’ll take $2,500 for it or a new Canon 6D with the 24-105mm EF Lense. For serious!