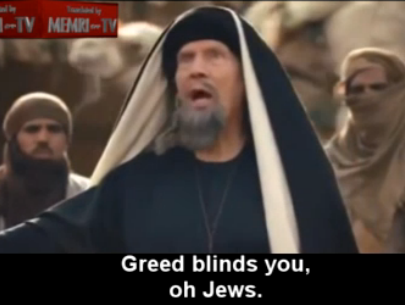 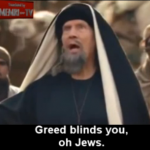 It’s Ramadan. It is a time of reflection, daytime fasting, prayers, and some of the best Arabic language television dramas and comedies. They are played each night while families and singles are breaking their fasts.

In past years, some dramas have featured conspiring Israelis and stereotypical plotting Jews. In 2013, only two shows has used that formula, and the ratings are awful. “Khaybar” is a drama funded by Qatari interests, and it can be seen mainly in Egypt, Iraq, and Algeria. It tells a lovely story set in Arabia during the seventh century, when Islamic forces warred with Jews. In the show, a community of Jews must be killed, and Khaybar shows the carnage better than Game of Thrones shows a Red Wedding. Yusri al-Jundi, the Egyptian author of the show, told an Al Jazeera reporter that his show simply showed that Jews of the seventh century are the same as today’s Jews – they spread corruption wherever they reside. He added that the series – directed by a Jordanian – shows that Muhammad established a state with full civil equality for Jews, but they violated the agreement and were not to adapt to the new equal system. Ramadan Kareem!

In this video, actors in the series discuss the nature of Jews.

“There was in Damascus” is about a Widad, a young Jewish woman from Damascus who must marry Fuad, a Zionist. Yet her heart still loves her Muslim boyfriend. She must struggle between her desire for love and passion and her duty to family and religion. The story follows the characters from 1947 to 2001. Fuad, her Syrian-Jewish husband is a Mossad operative who helps Syrians Jews get to Palestine and Israel. Widad remains a Syrian patriot and refuses to move to an occupied land.

One of the most popular Ramadan series is “Al Arraf” (The Fortune Teller). It stars Egypts beloved comedian, Adel Imam. He plays a con artist who steals millions and is sent to prison. He escapes from prison during the 2011 Cairo Spring riots, enters politics, and is elected president of Egypt. (Are they saying the the Muslim Brotherhood are con artists? Of course, not. It is just a comedy made months before Mohammed Morsi was ousted.)

Here is a snippet from it


Word is that the most popular comedy sitcom is on MBC1, the same group that gave us Arab Idol. They are airing (or cabling) ABU AL MALAYIN (or Father of Millions). This situtaion comedy is about two wealthy brothers who decide to make money off the Arab Spring. Seeing riots around the Arab World, they decide to sell tear gas and other tools of repression to Arab governments. Also, if they get poor ratings from Human Rights Watch and other groups, their street cred will increase and they can sell more.

If my Arabic skills are still good, then this is the link to the series CLICK HERE

Break out the dates and start viewing.