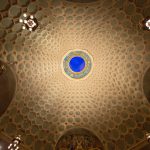 This week, The New York Times profiled the expected rebirth of the Wilshire Boulevard Temple in Los Angeles. It had seen better times. Once known as the Temple of the Stars, built with donations from Hollywood moguls, this huge, domed synagogue was in disrepair and crumbling. With eight rabbis – no waiting – and a cantor, membership had not grown in years, and the hefty bulk of Jewish community had moved West and to the suburbs; Jewish families no longer were residing downtown, along Wilshire, or in the predominantly Asian- and Mexican-American area of Koreatown.

Rather than pack up and move, Rabbi Steven Z. Leder, his staff, clergy and board have raised $150 Million to fix up the building and even expand it. $150 Million!

A nice chunk of change that could have built a lot of Holocaust Museums, but instead they are spending it to clean up the Byzantine dome and more.

Will young Jewish families in an L.A. car culture take the subway from Silver lake and Los Feliz to K-Town? Will the investment pay off?

Wait. Last week, The Forward profiled Rabbi Angela Buchdahl a rabbi of Korean-American heritage at Manhattan’s Central Synagogue. Born in South Korea, Rabbi Bucdahl grew up in Tacoma, Washington and was a member of its Temple Beth-El.

I sense a mash-up!

If Rabbi Buchdahl would relocate to K-Town in Los Angeles and the Wilshire Blvd Temple, the project will be guaranteed to succeed. Rabbi Leder, give me a call, let’s discuss.