9 Comments
by wendy in furs
162 Views 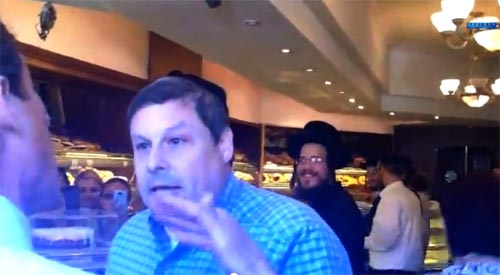 Yes Anthony Weiner’s New York City Mayoral campaign is pretty much dead, what with his 7% support. And that poll was taken prior to this video below, taken today in Boro Park, just before Rosh Hashanah:

The Washington Post declared that Weiner had hit “rock bottom” – “If you are arguing with voters, you are losing. Big time.” So what happened exactly? Saul Kessler, a visibly Orthodox real estate manager hailing from Far Rockaway called Weiner a “scumbag” as he was leaving a kosher bakery during a campaign stop. Conventional wisdom would dictate that one either ignores or politely respond to a heckler when one is campaigning. But isn’t there something innately dishonest about that? If someone were to call you a scumbag in public, wouldn’t it be human to want to smack them upside the head, let alone give them back a little of what they tried to dish out? In that respect, Weiner’s outburst is real, it’s human and frankly, it’s endearing. Who ever said that politicians have to be superhuman anyway? Isn’t that disconnect with the common man, that disconnect with genuine human emotion, that turns politicians from well meaning, perhaps even civic minded individuals into the arrogant and douchey automatons bereft of a single shred of sincere emotion that many, if not most, are.

And what of our friend Mr. Kessler? The man who expressed such concern for social norms that he felt compelled to call out Weiner in public and in front of multiple cameras? Of course it’s a free country – one can say what one likes, especially to a campaigning politician. But when one is visibly identified as a practicing Jew, one has a higher responsibility. This is where the concept of Chilul Hashem comes from – that when one acts publicly as a Jew, in a manner not befitting a Jew, one is profaning the name of God. I would imagine screaming “scumbag” might fall in to that category. Even if that is debatable however, Kessler is surely aware that the Talmud considers one who shames another in public as being akin to a murderer. That’s right. There’s a lot of discussion regarding this particular piece of Rabbinic knowledge, but whatever the case may be, the person doing the shaming is never very highly regarded. Even in the case where one rebukes another for a sin or a wrong that he has committed, if one does so in public and with the intent of causing shame, well… let’s just say Hashem does not love that so much. Saul Kessler might want to contemplate this during the 10 Days of Repentance between Rosh Hashanah and Yom Kippur. Also, given his stature, he may want to lay off the babkah or better yet, cut out carbs altogether.

Besides, what does Kessler care about Weiner’s New York Mayoral campaign? Is Far Rockaway even really New York City? (I know it is. I’m just being a brat!)

UPDATE: The Weiner campaign just released a longer video wereby Saul Kessler is heard to say “You’re a real scumbag Anthony… You’re married to an Arab.” Great. So now we have HD video of an Orthodox Jew making a racist statement. Pure chillul hashem. No wonder Weiner was so pissed. Besides, Huma Abedin, a long-time aide to Hillary Clinton, isn’t an Arab. She’s Muslim. Her Father was born in India and her Mother was born in Pakistan. And Weiner’s tweet on the issue?

.@moneyries in defense of me, the guy waited til I took a bite of honey cake to take a run at me.