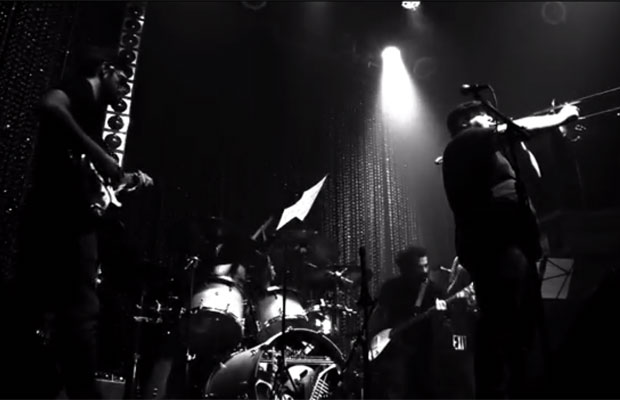 Deveykus is a Philly-based, Hassidic Doom Metal band led by trombonist Dan Blacksberg. In Hebrew, Deveykus means: “To Cleave to god” and refers to an ecstatic, trance-like state brought on by the repetitive singing of nigunim – wordless Hassidic melodies. Blacksberg was recently interviewed by Vice Magazine where he discussed his inspiration and influences:

I mean, a room full of men with huge beards wearing all black, probably wasted on vodka, singing these songs over and over again for hours. That seems too brutal and esoteric to fit in with a more mainstream presentation. Plus combining Jewish music with more experimental forms of metal is still pretty unexplored territory. That and there’s already too much weak world music out there that bills itself as Jewish and references more mainstream pop forms. I wanted the intensity of the music match the intensity of the Jewishness of the tunes. Like the Deveykus and the doom really fit like two different animals somehow evolving completely compatible characteristics, but from two completely different evolutionary paths… I think the seed for this music came from growing up going to synagogue. I was raised in a mainstream Jewish family. We celebrated most holidays, but we didn’t really keep kosher. We went to services about once a month. I did the whole Hebrew school thing and even the obligatory Israel trip. I got into klezmer starting with a random CD that my parents had, and then from studying with people at klezmer workshops in the US and Canada… I was already pretty disillusioned by religious ideology by the time I started getting in to klezmer. Once I found that, then that was a lens that I could use to as a way to look at the rest of the tradition, religious and otherwise. There’s a lot to like in Judaism, but I’m not into dealing with the religious practice. For me, it’s all about the Jewish music that kicks some serious ass. Luckily there’s a lot of it. Unfortunately, it’s almost all from 80 to 100 years ago.

Kim Kelly’s interview was excellent. Do make the effort to read it in full over at Vice. The video above is nearly an hour long and shot lost summer at Johnny Brenda’s in Philadelphia.