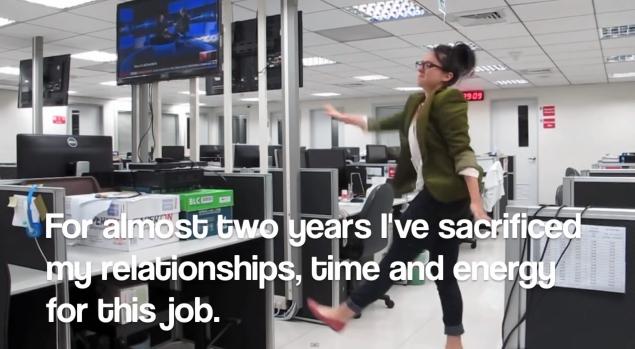 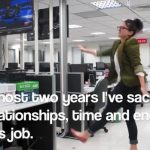 Marina Shifrin leaned in… leaned in so far that her video has gone viral this week and it has accumulated more than 6.6 million views so far – 2.8 million in the past 12 hours.

Shifrin is a journalist who scored a job in Taipei at Next Media Animation. Living in Taiwan was not as fun as Manhattan. She spent long hours at work, spent Friday nights skyping with… her father, and used that famous Jewish dating site: LinkedIn.com to find love (these are her jokes from her very funny stand up routines)

But this week, angered and fatigued at 4:30 AM, working alone in the company office, irritated that her boss (Michael) only cared about how many impressions their videos received (quantity not quality), she made a video telling her colleagues that SHE QUIT. She also dances to Kanye West’s song, “Gone.” Gone, cuz she is out of there.

Taiwan is known for long hours, late night meetings, tight deadlines (it is the NEWS business, people.. ), and a lack of kudos for your work. Ummm.. isn’t that like all jobs?

Next Media Animation, the animator known internationally for its racy video parodies of the news (for Cartoon Network, BBC, Conan, The Daily Show with Jon Stewart and Spike TV) made a response video to tell the world that they now have a job opening for a hard working, low paid content editor. In it, you can see her boss, Michael Logan.

Will Marina be going on Birthright during her hiatus? How is her Chinese? Technion and Li Ka-Shing need a writer in Guangdong.