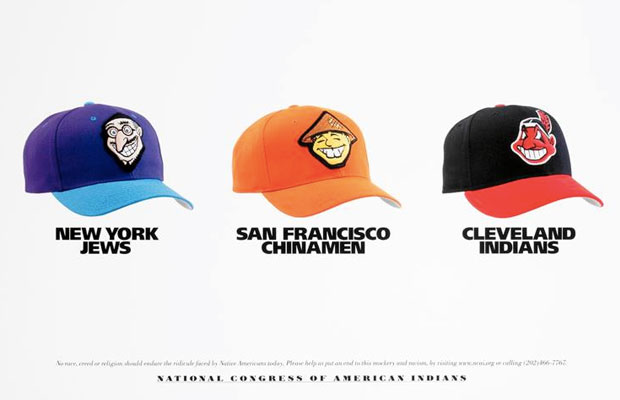 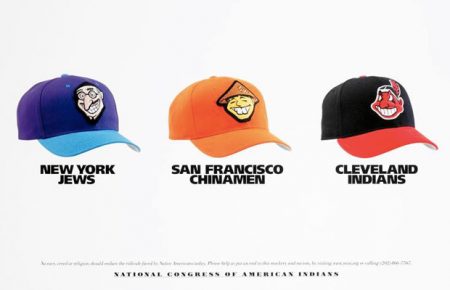 Yes. I get it. And I agree with the general sentiment:

The National Congress of American Indians has recently come out with a hard-hitting poster framing the context of how degrading, insulting and racist using Native American images such as that of the Cleveland Indians and the Washington Redskins really is… Joanna Schroeder, writing for the Good Men Project, poignantly notes that, “If you wouldn’t wear a New York Jews or San Francisco Chinamen hat, you shouldn’t encourage sports teams to use Native images, names or iconography.” … Perhaps it is the fact that so many Americans interact with so very few Native Americans that leaves the masses with the impression that “no one really minds” or is offended. When other cultures are framed in such insulting, and stereotypical images, it becomes clear that no self-respecting member of such groups could, would or should take this without protest or offense.

And of course the Jews have never suffered the level of institutionalized racism and outright genocide suffered by American Indians and Chinese immigrants but… is it wrong that really, I’d be thrilled to wear a New York Jews baseball cap and cheer my team on as I munch on kosher hot dogs on Matzoball day? Is it wrong that despite tenuous or outright non-existent ties to Judaism, I am thrilled at the thought of soccer teams in Europe like Tottenham and it’s “Yid Army” and Ajax with it’s “Super Jews?” 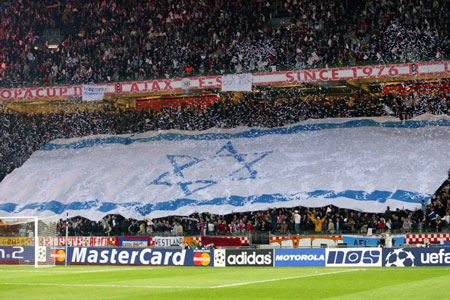 OMG I’d LOVE to be at one of those games. But yes, racist and demeaning images of Native Americans as American sports team logos has to stop.