A Last Posting from the JFNA GA: DaromaTzafona and Phytech

This is my last in a series of posts on the GA. This and others have focused on the people who came to the GA to promote various causes. You can see my previous post about the GA itself.

As in America, Israel has lost a large share of its jobs in manufacturing over the last thirty years. It has recently been reported in the news here how more jobs in unskilled labor are threatened by Israel’s need to use its military aid from the United States in America. More and more military supplies that were once produced here have been procured in the United States instead. This is because much of the U.S. military aid is in the form of credits that can only be spent in the U.S. The last business that manufactures boots for the IDF is in danger of closing.

The problem of the loss of industrial jobs for Israel’s labor force has been compounded in the last twenty years by successive Israeli governments’ emphasis on developing Israel’s high tech sector. This is in part because of Israel’s lack of raw materials and cheap labor that could allow it to compete with the new manufacturing power houses of East Asia.

Brain power, it has been said, is Israel’s best natural resource. This has brought a great deal of investment into Israel as many companies have their research and development divisions in the country. A number of Israeli start ups, such as Check Point and Waze, have been hugely successful.

In spite of this success, there has been little “trickle down” to Israelis who once found employment in manufacturing. Indeed, these people now make up Israel’s growing community which lives below the poverty line. Israeli news frequently reports on how Israel has one of the highest rates of poverty in the Western world. Many of the impoverished live in what is called the periphery: small remote towns such as Beit Shean in the North and Netivot in the South which were once “factory towns” that have lost their bases of employment.

Fortunately, there is an Israeli organization which is working to develop new manufacturing jobs in the periphery. DaromaTzafona (NorthSouth) was founded in 2003 in partnership with the Jewish Agency for Israel to invest in new businesses in the Galilee and Negev that would create new factories. It is a non profit and describes itself as “incorporated as a company for the benefit of the public.” Its operations are funded by donations from its owners and from the support of the Jewish Federations of North America.

Maya Schwartz is Daroma Tzafona’s Vice President of business development and was one of its representatives at the GA. She has been with the company for six years and is one of only four full time employees at its headquarters in the Misgav Industrial Park in the Galilee. Maya described DaromaTzafona as a philanthropic organization. “We want to improve the quality of life in the periphery, such as the Negev and the Galilee,” she explained. 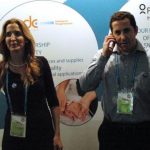 DaromaTzafona is not a venture capital firm. It does not invest in companies, but loans them money. “we give up to 2 million Shekel loans to small and medium sized businesses, but they have to have factories and create new jobs in manufacturing,” said Maya Schwartz. As of the end of 20012, over $130 Million was loaned to 320 businesses.

One of those businesses is Phytech. Phytech is located at Yad Mordechai, just north of Gaza and has an office in Tel Aviv. The company develops new technologies to improve agriculture and the devices which it develops are produced in Israel.

Its main product is a sensor that reads the “heartbeat” of the plant. Whether tomatoes or carrots, the sensor can tell the farmer whether the crop needs more or less water. This not only allows for savings but prevents the loss of crops due to lack of hydration or over hydration.

Phytech is also working on a product for beehives. The new device will keep track of the quantity of honey produced at all times. It will also measure how much of the honey is consumed by the bees.

Sarig Duek is Phytech’s CEO and he was at the GA at the DaromaTzafona booth. Sarig, 46, lives at Kibbutz Kfar Etzyon in Gush Etzyon where he was born and raised, but is not a member there. He rents his home. Sarig has been with the company for three years. Before that he worked for a private security company. Sarig was an officer in the IDF armored and once served as an armored battalion commander in the reserves. (Full disclosure: I served in Sarig’s reserve battalion.) Sarig currently serves as an advisor to the commander of the IDF’s regular army’s 7th armored brigade.

Phytech received a half million dollar loan from DaromaTzafona, which they have since paid back. Sarig wanted to help promote DaromaTzafona, in addition to his own company.

Phytech is not looking for an IPO. It wants to continue developing new agro products and create more jobs in Israel. Sarig is not just the company’s CEO. He is also an investor along with companies such as John Deer and DuPont. “I wasn’t looking for an exit [big payoff],” said Sarig.
“All of what we make is made in Israel to help Israel.”