Pesach Movies To Watch While You Social Distance 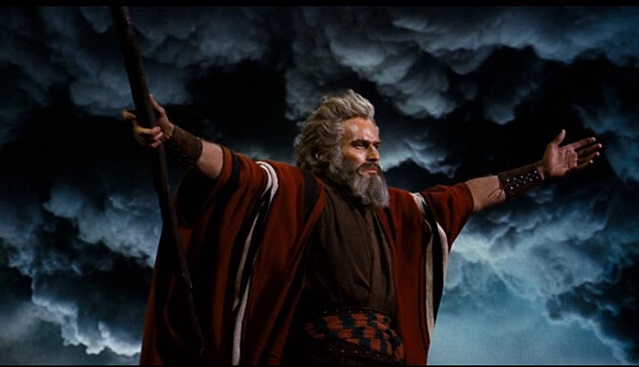 As we stay at home this year, I thought that I would suggest a few good movies about Pesach to watch. This was not an easy task since most movies based on the Bible, or about Jews, suck. Either they deviate so much from the text that they are just silly Hollywood movies which use Biblical characters as the heroes, or they are written by people who know nothing about Judaism.

This is certainly the case on most television show episodes with a Jewish theme. The worst offenders are Larry David’s Curb Your Enthusiasm and the infamous Hanukkah episode on Friends. I once saw a doctor show where an adult man came into the hospital for a circumcision. He said that he only just discovered he was Jewish and needed to be circumcised on the 8th day after he found out – no I am not making this up! He then had all of his family and friends attend the ceremony in the hospital for the celebration as if it were the bris of a baby.

Then there is Lucky Number Slevin. In this movie from 2006 with Bruce Willis and Lucy Liu, Ben Kingsley plays a rabbi who is also the leader of an organized crime group. Since he is a rabbi Kingsley makes it clear that he keeps Shabbat. Bruce Willis was told not to bother him with business on the Sabbath. Willis, of course, shows up at Kingsley’s home on a Friday night anyway and is told he must wait for Kingsley to finish studying Tora.

So of course Willis walks into a room where Ben Kingsley is reading from an open Tora scroll on a stand. No I am not making this up!

There are many more examples, but so little time. So here are the ones which you should watch.

The first has to be The Ten Commandments with Charlton Heston as Moses. At 3 hours and 40 minutes, it lasts about half as long as the average Pesach Seder. It was made by Cecile B. DeMille and is truly one of the great movies of all time. 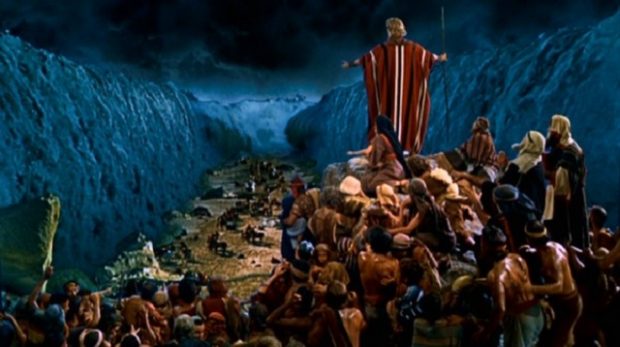 The movie cost more than $13 million to make in 1956, which is something like $30 billion today. OK, so by our standards the special effects are simple, but at the time the splitting of the Red Sea was the most amazing special effect yet. It also stars Yule Brenner as Pharaoh, John Carradine as Aaron, Edward G. Robinson as Dathan and John Derek as Joshua.

The full movie opens with a special introduction by Demille in which he explains that many sources were used in writing the screenplay, including the Talmud and the Midrash. This is evident in the depiction of Moses as the master builder of Egypt and a popular figure to the Egyptian people. The portrayal of the Midianites, who were cousins to the Hebrews, is another example of something from the Jewish tradition which is not written in the Bible.

I saw this movie as a kid on television. And that was long before HDTV. So I never got to experience it as it was meant to be seen until recently. If you have not seen it then you are really going to enjoy this movie. ABC aired it every year on Pesach when I was a kid. We told ourselves that this was for all the Jews in the country, but it was also for Easter which almost always falls out during Passover. 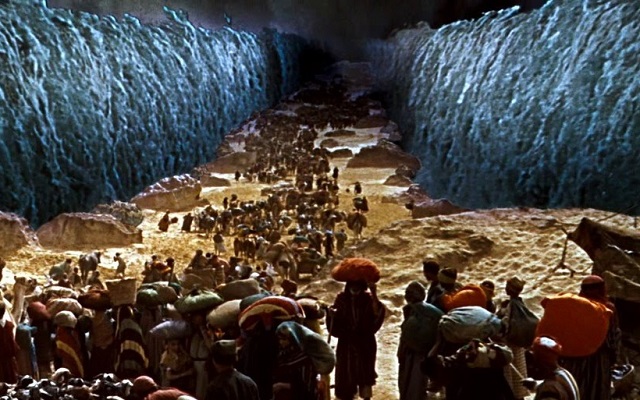 My father was a Hebrew school teacher. As such, he provided us with a running commentary about all of its mistakes. Like how it “makes up” the fact that Joshua was the Hebrew slave Moses saved from a brutal slave master and that Moses went undercover among the slaves to see what their suffering was like. It also makes Edward G. Robinson’s Dathan into the foil who leads the rebellion of the Golden Calf while Moses is atop Mt. Sinai receiving the Ten Commandments from God. The actual Biblical character Dathan is not mentioned until much later in the Bible as part of a different rebellion.

One glaring omission is the fact that Moses was actually given 15 Commandments to bring down to the people, not just ten. There were three tablets, but Moses dropped one and it broke. Just as well, he broke the other two when he threw them at the Golden Calf. 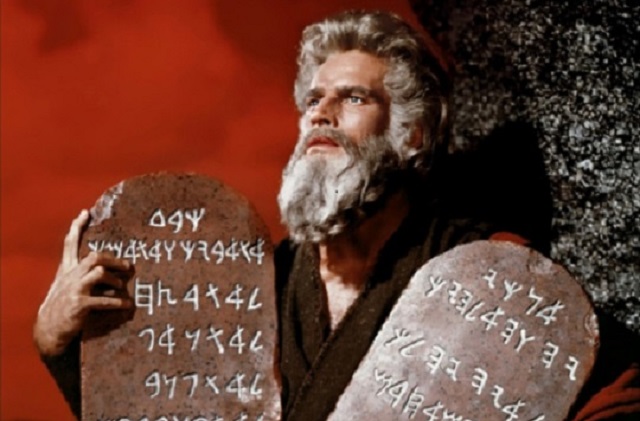 And Charlton Heston leads the first ever Seder which for some reason took place on the night of the slaying of the first born. There is even a kid asking some of the four questions. I guess they hadn’t written them all yet by then. And yes this really happens in the film!

As a Hebrew teacher, my father was most offended by the transliterations of the Hebrew names into English. OK so we all take for granted that Moses is Mo-She and Joshua is Ye-Ho-Shua. But they called Moses’ wife Sefora when the Hebrew is pronounced Tsi-Po-Rah. And the worst offense was the name of Moses’ mother. The Hebrew Yo-Che-Ved became Yochebel, pronounced Yo-She-Bel. This is the result of using the classic English Bible which is a translation of a translation of a translation. Newer English translations made directly from the Hebrew do a better job of preserving the pronunciations of the names.

However, you just can’t beat the performances and the cinematography. Yule Brenner is just brilliant here as Ramses. The movie depicts him especially hating Moses because he feels betrayed. They grew up together and Ramses knows that his wife, Nefretiri, really loved Moses.

The greatest line of the film is not from the Bible, but I almost wish it was. After the parting of the Red Sea and seeing all his men drowned a dejected Ramses, the Pharaoh, goes home and when asked by Nefretiri what happened he says, “There God is God.” Pharaoh thought that he was a god himself. Now he knows the truth.

Now for some movies about the Exodus from Egypt which you SHOULD avoid. Exodus: Gods and Kings from 2014 stars Christian Bale as Moses. This movie feels like a typical Hollywood action flick that just uses the Exodus story as the framework for a really dumb script. As such, it is like other silly big budget failures of recent years such as Gods of Egypt. This $140 million bomb portrays Moses as a schizophrenic who sees God as a young child. Who the hell came up with that idea?

You can also skip The Prince of Egypt, a cartoon movie made by DreamWorks, even if you are desperate for something new to see. It seems that they were too worried about offending anyone to make a real movie. And no it is not good for kids.

So watch reruns of Friends or ER for the umpteenth time instead of these two duds.

If you are looking for an adorable little independent movie that is both sweet and accurate as to how it depicts the American Jewish family experience on the Seder night, then When Do We Eat is the movie for you. It stars career Jewish character actors Michael Lerner (he played Arnold Rothstein in Eight Men Out) and Lesley Anne Warren (the original Mission Impossible and movies like Victor Victoria) as the parents hosting the Seder for their kids. The cast is rounded out with other notable Jewish Character actors like Shiri Appleby (Unreal), Ben Feldman (Mad Men) and Israeli actress Mili Avital (Stargate.) It also includes highly underrated Israeli actor Mark Ivanir (he played Goldberg in Schindler’s List) and the late great Jack Klugman as the grandfather. 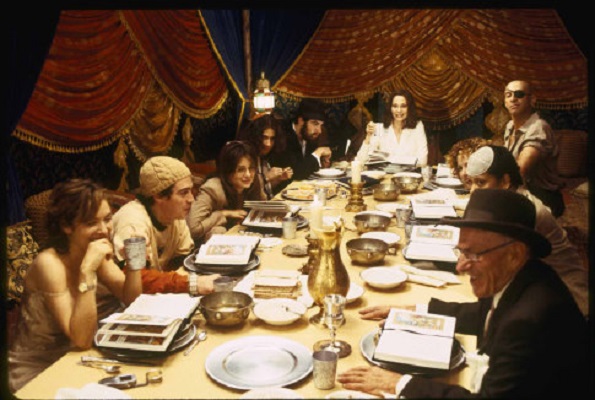 The premise is simple. Warren, the mother, wants this to be a special event so she has a catering company run by a Russian man (Ivanir) provide a kosher meal. They also set up a tent in the yard for the big night. The father, however, is not interested in religion and is bored by all the customs of the Seder. He just wants to get on with the meal, hence the title. Everyone has had a relative like that at every Seder. For my family it was my uncle.

We later learn that the mother went all out this time because she wants to be supportive of their son who recently became a Chabad ba’al t’shuvah (repenting Jew.) But the real fun comes from the fact that the youngest son, a teenager, has recently been caught using drugs and the father is far from open minded about this. The boy gets a hit of ecstasy from a friend which gets mixed up with the father’s medicine and so he ends up unknowingly tripping throughout the Seder. 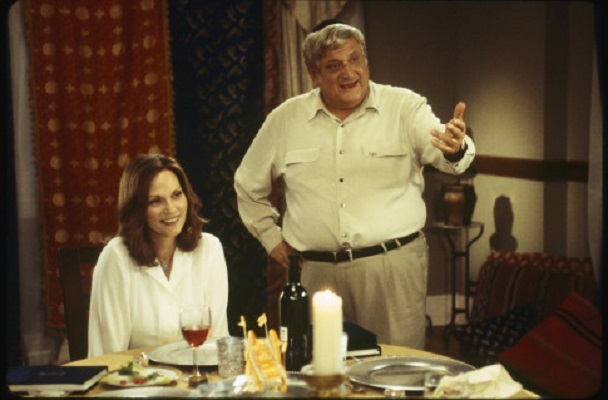 Writer/director Salvador Litvak does a great job with all of the comic timing and a witty screenplay. It would have made a brilliant stage play. In fact someone should produce it as a play. I don’t know what happened to Litvak, but he has not done anything in the fifteen years since When Do We Eat.

Whether you are Jewish, or not, whether you are Orthodox or secular, and even if you have only been a guest one time at a Seder, you are sure to enjoy this jewel of a movie. 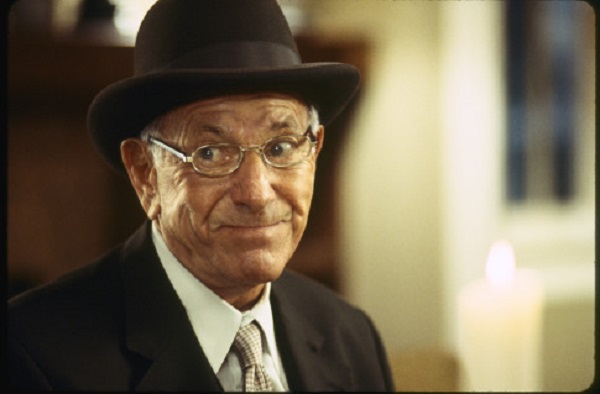 Now for something to watch only if you have become so despaired of self-isolating that you are looking for something that will push you over the edge and make you really want to shoot yourself –Yentl! Pretentious, self-indulgent, tedious, dull, dreary, pointless (if I left anything out please let me know) and just plain dumb. Barbra Streisand directed and starred in this bomb, playing the title character who is a woman who wants to study Talmud. But in her orthodox community at the end of the Nineteenth Century in Eastern Europe, women were not allowed to study Talmud so she moves away and pretends to be a man.

If you have already seen this movie, I feel your pain. I wonder how it is possible to survive sitting through the whole thing from start to finish. Here is the dumbest part:
According to the Tora a man may not marry a woman who was once married to his brother. However, should a man die without any children then a surviving brother must marry the widow and the first child – if they have one – be named the late brother’s heir. This is called a levirate marriage or Yibum in Hebrew.

Please play close attention here as the stupidity is hard to follow. So Mandy Patinkin falls for the Rabbi’s daughter played by Amy Irving. But the Rabbi wants her to marry his best student, Yentl, who neither he, nor Irving, nor Patinkin knows is really a woman. So what does Patinkin do? Well you see, since he and Yentl are best friends then that means that they are like brothers so he says that if Yentl marries the Rabbi’s daughter then…..

Sorry I had to take a break from writing there for a bit. Having a normal brain it would not allow me to complete any attempt at explaining this absurd poo. Yah that’s right! I said poo, so there!

I never read the Isaac Bashevis Singer story on which Yentl is based, but I hope that this part of the plot is not in the original. If it is then chalk this one up as an example of how even the greatest sometimes make mistakes. You know like Beethoven’s Eighth and Revolution Number 9.

Have a happy rest of Chag everybody. Be safe. Be well. Stay sane.