More from the JFNA GA: Bet Elazraki and Hiddush 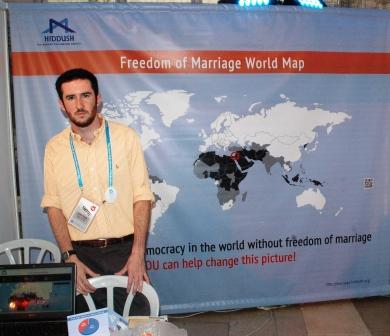 This is my third in a series of posts on the GA. You can see my previous post about the GA itself.

I was tired after a long day of standing around talking with people at the different exhibits. I went outside to sit down for a while and that is where I met Ari Korman. Ari was at the GA to represent Bet Elrazraki Children’s Home. He said that he came to “meet our friends from the federations and to raise awareness.”

Ari Korman, 30, is originally from Englewood New Jersey and has lived in Israel for three years. After finishing high school at the Ramaz yeshiva in Manhattan, Ari came to Israel to study at Yeshivat Hakotel in Jerusalem’s Old City. Yeshiva was not for Ari so he left after only three days. He then spent a Shabbat in Netanya with a friend of his mother’s who also happened to be the director of Bet Elazraki. Ari’s mother had met Rabbi Yehudah Kohn when she visited the center on a mission to Israel with Emunah. Rabbi Kohn lives with his family on the premises.

Bet Elrazaki is a home in Netanta for 253 children between the ages of 4-18. The children it houses have either been abandoned by their families or taken away from them as a result of a court order. Many were the victims of physical abuse. They come from all over Israel. Unfortunately, the parents never return for their children.

Sometimes the home takes in newborn babies too. Ari told me one such story. “Last year we picked up a baby girl abandoned at the hospital by an illegal immigrant Pilipino [woman]. We took the baby for six months before she got adopted. The baby slept with Yehuda [Kohn] and his wife in their bedroom.” Older women in the community help with babies. The home has one of the only emergency baby shelters in Israel.

Ari pointed out that they offer more than just foster care. “We stay with the kids after they turn 18 and pay for their college,” he said. “Our goal is to break the cycle of distrust.” As Ari explained it, “kids who grow up in it [violence and other abuse] even if they get taken care of end up with kids like that.” It has often been said that children of child abuse are likely to some day abuse their own children and children raised in homes with drug/alcohol abuse are more likely to become substance abusers as adults.

The home, unfortunately, does not have the facilities to take care of the disabled. If a child has a physical disability, such as blindness or is confined to a wheelchair, then Bet Elazraki cannot accommodate him. It also does not take in mentally handicapped children. They do make an exception for siblings. “We will never break up a family,” said Ari. They do what they can to keep brothers and sisters together. 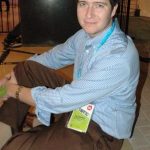 The children attend 27 different schools in Netanya. Bet Elazraki is modern orthodox so the boys must wear kipot, the girls skirts and Shabbat is observed. Their goal is not to make the children be religious. When they grow up there is roughly a 50/50 split between religious and non-religious.

About 65% of Bet Elazraki’s funding comes from Israel’s Ministry of Welfare. The rest comes from private donations. The Jewish Federations of Youngstown Ohio, Cincinnati Ohio and San Antonio Texas are supporters as well as Emunah of America.

Ari continues to work for his family’s Private Equity firm in New Jersey called Nashone. Ari is the vice president. They have invested in companies such as Israel’s Mashbir department store chain.

Adam Ross, 25, is originally from Lennox Massachusetts. He has lived in Israel for three years and spent two years in the Israeli Army where he served as a commander in the Nahal infantry brigade. Adam grew up in a reform Jewish home and became more religious in high school. Adam represented Hiddush at the GA. He is their director of social media.

Adam described Hiddush as an “Israel/Diaspora partnership working to create a Jewish democratic state in Israel that allows all of its citizens to practice religion according to their conscience.”

Hiddush is not connected to any political party. It wants to bring together everyone who agrees with its religious platform regardless of their other political opinions.

Hiddush would like Israel to only have secular marriage and no state sponsored religious marriages. People would get a civil marriage and can then decide for themselves to have a religious ceremony in whatever form just as they do in other democracies. 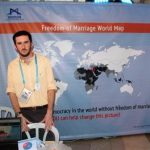 Adam Ross at the JFNA GA

Disbanding the Rabannut would also end the orthodox control on conversions to Judaism in Israel. Adam feels that the conversion system in Israel, “has failed. There are less than 2,000 conversions every year and every year the number is dropping. We need to take conversion out of the government’s control.”

Adam says that he identifies with the National Religious community. But he feels that religious freedom is important and that Jews are less likely to be more religious today due to the religious coercion of the orthodox. “By creating a Judaism that isn’t institutionalized,” said Adam, “you will encourage more Jewish practice.”
For more information: www.hiddush.org