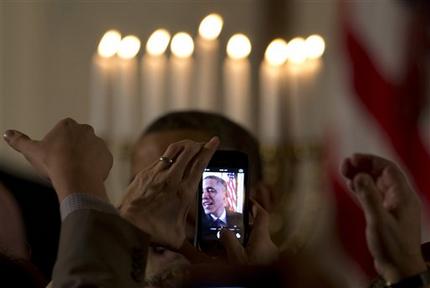 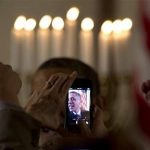 The White House had so many people it needed to invite to its annual Hanukkah party that what was once a one hour party was transformed into two parties. Extending over 8 hours, it was most likely a miracle. Each party had about 500 invited guests.

Present at the afternoon party were President Obama, First Lady Michelle Obama, 10-year old Asher Weintraub from New York City who designed the Menurkey; Dana Gitell who coined and trademarked the term “Thanksgivukkah” and her sister Deborah; and Drew, Lainey and Kylie Schmitter (their husband/father is serving in Afghanistan); and Rabbi Amanda Lurer, a lieutenant and chaplain serving the U.S. Navy.

This menorah they used was made by Manfred Anson (1922-2012), an immigrant to the United States who was born in Germany and witnessed Kristallnacht. The menorah, which was on loan to the White House from the National Museum of American History (Smithsonian) uses small Statues of Liberty as lamps. (At 14, Manfred was enrolled at an agricultural school in Germany in the hope that he could secure a visa to emigrate to Palestine. However, just prior to the start of World War II, another opportunity presented itself, and he was chosen as one of 20 boys rescued by the Jewish Welfare Guardian Society of Australia. In Australia he joined the army to fight Hitler and the Axis powers)

In the evening, the President hailed the recently announced P5+1 agreement, and expressed enduring support for Israel. “For the first time in a decade, we’ve halted the progress of Iran’s nuclear program. And key parts of the program–key parts of the program will be rolled back, even though the toughest of our sanctions remain in place,” President Obama said, to…. applause.

In the evening reception, one third of the SCOTUS was present: Justices Ginsberg, Breyer, and Kagan. Rabbi Joshua Sherwin, chaplain at the U.S. Naval Academy at Annapolis, gave the blessing at the evening reception, adding, “We now kindle the menorah and recite two blessings as we kindle these lights — the she-asa nissim, thanking God for the miraculous capability to bring light to the darkest corners of the world and for the leaders who are dedicated to strengthening religious freedom in our days just as the Maccabees did in ancient ones.” Also present in the evening were Israel’s Ambassador to the United States, Ron Dermer; Matt Nosanchuk, the White House’s outreach liaison to the Jewish community; filmmakers Sandi Simcha DuBowski and Amichai Lau-Lavie; Idit Klein; Congresswoman Debbie Wasserman Schultz; actor Joshua Malina; Martin Tannenbaum; Joy Ladin; Arnold Eisen; Rabbis David Inger and Sharon Brous; Andrew Zelermeyer; Jeffrey Goldberg; Rob Essman (LA Jewish Journal); David Makovsky; Rabbi Sharon Kleinbaum of NYC; and Jayson Littman, a NYC party (myhebro) producer. Comedian and TV star Larry David, whom the President socialized with last summer during his vacation on Martha’s Vineyard, and Houston Rockets player Omri Casspi, the first Israeli-born player in the NBA, and Craig Breslow of the Boston Red Sox were among the guests. Joan Nathan, Rabbi Capers Funnye, Howard Berman, Adam Milstein, Steven Rabinowitz and Congressman Henry Waxman and former Florida Congressman Rob Wexler ate latkas. Also present were Michael D. Wise, executive director/CEO of the Jewish Federation of Buffalo, NY who scored an invite via his Congressman.

Hagafen 2011 Napa Valley Merlot and Don Ernesto 2012 Collage Roussanne were served at the kosher event (The Library of Congress earlier in the day event was ‘kosher style.’) Also latkas, lox, applesauce, and sour cream were served. Guests were entertained by the U. S. Marine Chamber Orchestra. Pizmon, an a cappella group of Columbia University, Barnard College, and The Jewish Theological Seminary of America students performed in the evening, while Zemer Chai, a choir of 30 singers from the Washington, DC metropolitan area, performed in the afternoon.

In the evening party, Obama related the story of Hanukkah to the life of Nelson Mandela (you can hear Justice Kagan call out an Baptist Church-like affirmation to the story). It closed with a pause and then a rendition of Ma-oz Tsur. It reminded me of the ending of “Merry Christmas, Charlie Brown.”