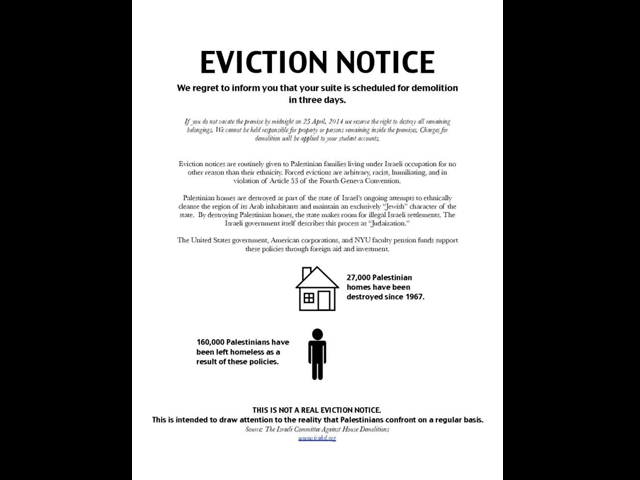 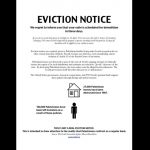 It has been reported in New York area and U.S. national media that NYU Students for Justice in Palestine (SJP) targeted Jewish students in two NYU dormitories and placed fake eviction notices under their doors. The group responded that they did not target Jewish students.

The group wrote that “Over 2,000 students at New York University received mock eviction notices on the morning of April 24th. Every resident… was told to evacuate their dorm, which would be demolished within three days. The flyers were clearly fake – with the words “THIS IS NOT A REAL EVICTION NOTICE” scrawled across the bottom – yet they are grounded in a disturbing reality: since 1967, approximately 160,000 Palestinians have received similar notices, only to witness their homes destroyed by Israeli forces shortly after. The purpose of this action, led by New York University’s Students for Justice in Palestine, was to draw attention to this reality Palestinians face daily. Through its policy of housing demolitions, Israel aims to ethnically cleanse Israel/Palestine of its Arab inhabitants in a systematic manner. The rate at which this policy is carried out is astonishing. In 2012 alone a total of 600 Palestinian structures were demolished by the Israeli authorities, including at least 189 homes displacing 880 Palestinians, 468 of whom were children. Thousands more are displaced due to the demolitions of animal shelters, water cisterns, and other structures related to their livelihood or because of the destruction of infrastructure, including roads. These demolitions are illegal under international law, breaching article 53 of the 4th Geneva Convention.”

They continued, “Accusations leveled against SJP claimed that the action targeted Jewish students; this is erroneous and no objective evidence has been cited to support these allegations. In reality, nothing could be further from the truth. At its very core, SJP is a group opposed to ethnic discrimination and institutionalized racism. Racism is not limited to the practices of the Israeli government, and opposing policies and racist rhetoric, including anti-Semitism, is vital. The students in SJP and the participants in this action come from diverse, including Jewish, backgrounds. This action addresses only one of the many horrific aspects of the occupation that Palestinians face daily. NYU SJP will continue working towards ending these injustices.”

While the group states that Jewish students were not targeted, others wonder why the dormitory that was selected is the one containing the highest concentration of Jewish students; it has a Shabbat elevator.

Josh Beckman, a spokesperson for New York University said that NYU is investigating the incident which is disappointingly inconsistent with standards NYU expects to prevail in a scholarly community. He said. “Were it to be the case that the fliering was done [at the dorm] because it was perceived to be a dorm with a higher proportion of Jewish students, that would be troubling, dismaying and a matter of deep concern for our community.”

Oh wait, here is a statement from the ADL: “Mock eviction notices are a disturbing tactic designed to silence and intimidate pro-Israel advocates on campuses around the country rather than promote meaningful dialogue. While students have a right to express their views on campus, targeting students in their residence halls is an unsettling intrusion. We appreciate that NYU’s administration has spoken out against such hateful actions, and we urge them to take steps to reassure students that their personal space is secure. The anti-Israel activists who passed out these notices are creating tension, intimidating students and fostering a hostile atmosphere on campus. The academic environment should be a place where constructive dialogue and discourse about the Israeli-Palestinian conflict can thrive.

In other news, Dan Clevenger, the mayor of Marionville, Missouri, resigned over anti-Semitic remarks he made in support of the white supremacist former Ku Klux Klan leader who is accused of murdering three people at Jewish community sites in Overland Park, Kansas. Clevenger resigned after town alderman voted 4-1 to start an impeachment process against him after he said that he agreed with many of F. Glenn Miller Jr.’s anti Jewish beliefs and statements. Miller is accused of killing William Corporon, 69, and his 14-year-old grandson, Reat Underwood, on April 13 outside the Jewish Community Center and Terri LaManno, 53, at a nearby Jewish retirement complex. None of the three were members of the Jewish faith. Mayor Clevenger said last week he believes Jews have played a role in hurting the economy and American healthcare.

Also, today, an Atlantic City, New Jersey man who co-founded a radical Islamic website and pleaded guilty last fall to using the Internet to make threats against Jewish groups was sentenced to thirty months in U.S. federal prison. Yousef Mohamid al-Khattab, 45, had faced as much as five years in prison, but Judge Liam O’Grady said he imposed the shorter term so people could “understand the line” between free speech and attempting to incite violence. Mr. Mohamid al-Khattab, who was once known as Joseph Leonard Cohen, before becoming an Islamist said his posts were just clownish jokes. In some postings, he provided names and addresses of Jewish leaders and synagogues and urged Muslims angered by the Israeli-Palestinian conflict to “deal with them directly at their homes.” Mohamid al-Khattab was the third person connected with Revolution Muslim to be convicted in federal court in Alexandria. Virginia. His co-creators admitted using the site to deliver thinly veiled threats against the creators of the “South Park” television show for perceived insults to the prophet Muhammad.