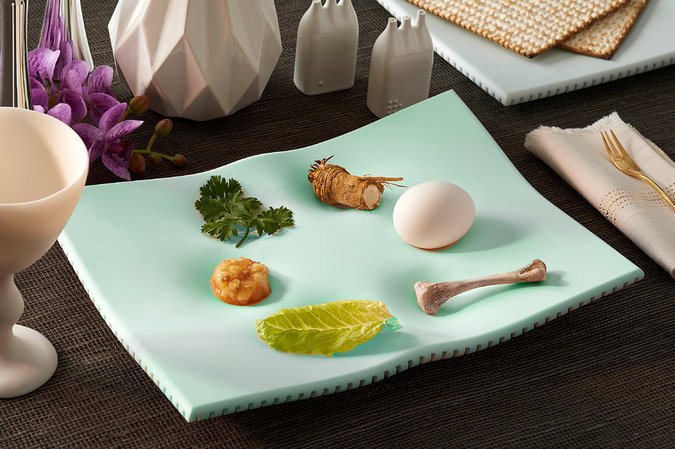 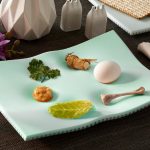 It’s here. The Wednesday before the first seder, the day when countless newspapers and blogs post their Passover recipes for readers. Here is a roundup of some of the notable ones:

What is Pesach without Joan Nathan? Joan leads off The Times coverage with artichokes. I feel so Roman. Her fried artichokes are bylined from Italy and includes a slideshow with Paola Modigliani Fano

Mrs. Fano, a retired schoolteacher in Rome resides in the 16th-century Palazzo Cenci near the Jewish Ghetto. She presented Joan with a facsimile of Donatella Limentani Pavoncello’s 1880 cookbook, “La Cucina Ebraica della Mia Famiglia” (“The Jewish Cooking of My Family”) from Carucci (1982), and a coltello da carciofi, a knife for cutting artichokes.

The recipe is here. 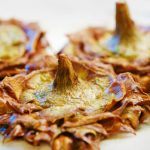 Additionally, Florence Fabrikant at The Times highlights seder plates. And David Tanis, the famed chef who says he became interested in cooking due to his Jewish heritage highlights a Moroccan Fish. 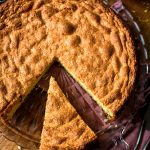 If you skip over their review of a new Mexican-Taiwanese fusion restaurant in Brooklyn, you make it to Melissa Clark’s profile of Seder desserts. She asks a fifth question, Why on this night should you “make a chocolate cake with matzo flour when a flourless chocolate torte is going to be so much better anyway?”

Melissa Clark’s recipes include ones for macarons, toffee, and a hazelnut citrus torte. A link to the dessert video is here. 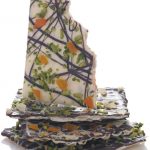 Over at the Boston Globe, they picked up Leanne Italie’s Associated Press story on unique matzo. Titled “Not Just Your Grandmother’s Matzo Anymore,” the story shares ideas on new matzo recipes, such as Martha Stewart Living’s chocolate covered matzo, topped with nuts and dried fruit. Martha Stewart’s Living’s Matzo Ball Soup recipe can be found here. The Newark, NJ Star Ledger picked up the same story from the AP. 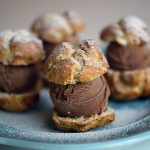 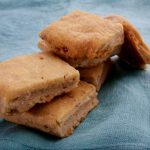 The Los Angeles Times highlights bread this week. SERIOUSLY! Their Passover recipes probably get published later this week. In the interim, check the Jewish Journal for their drunken Passover grilled cheddar cheese recipe. I mean, come on, even The Salt Lake City Tribune has a Passover recipe for Utah residents (for chicken stuffed with matzo); and The Denver Post has a chicken stuffed with medicinal marijuana hemp .. no, I am kidding, it is for Ms. Stephanie Witt Sedgwick’s Nana’s Turkey Tenderloin with Mushrooms.

The UT (Union Trib) in San Diego offers a five page primer on Matzo Balls, and a recipe from chef Bobby Flay and the Dallas based chef Tina Wasserman (author of Entree To Judaism).

Flying over to Chicago, Phil Vettel of The Chicago Tribune makes dining recommendations; Peggy Wolff explains kitniyyot and her longing for corn, rice, millet, sesame and poppy seeds, and legumes such as lentils, chick peas, fava beans and edamame; and a recipe for lemon bar matzo is explained. The also explain why quinoa is Kosher for Passover. If The Chicago Tribune is blocking you, screw them, and check out the salad recipes at The Chicago Jewish News.

The Miami Herald provides a recipe for Brisket made with Coffee and a Kosher for Passover Cream of Zucchini Soup.Over at The Gainesville Florida newspaper, Orly Padawar shares her family’s North African Passover traditions. She serves green peas, fennel and meatballs, which her mother would make for her growing up in Israel. The Sun Sentinel in Florida steals the recipe (not really) from a Boca Raton resort of a Kosher for Passover potato salad. It uses sweet potatoes, almonds, mustard, and apples. 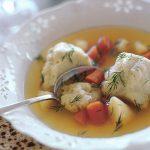 ABC News, along with the Tasting Table, goes south with Passover Brisket Tacos. here is the recipe for Kosher for Passover Tortillas. They also make a mash-up of Matza and Lasagna, called MATZAGNA.

The Detroit Free Press has a chocolate matza layered torte recipe; and @SamanthaMelamed at The Philadelphia Inquirer covers several chefs as they make matza balls with more variations than Goldberg. Recipes includes ones for Avgolematzo Soup, Not Exactly Aunt Lil’s Matzo Ball Soup, and Mushroom-Matzo-Ball Celery Root Soup. Melamed has one of the best stories of the roundup. 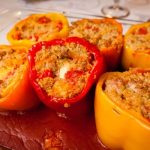 Long Island, NY Newsday shares Rabbi Jonathan Waxman‘s Passover recipe for turkey and quinoa stuffed bell peppers. Rabbi Waxman serves Beth Sholom of Smithtown, NY. His wife, Sarrae Crane, makes her own gefilte fish from scratch, as well as chicken soup from her mother’s recipe. They also share a recipe for CURAÇAO HAROSET BALLS (take that! Meatball shop), and CHICKEN BREASTS WITH SHITTAKE MUSHROOMS AND TOMATOES, and a BEET-CUCUMBER SALAD that Rabbi Waxman serves during the Karpas portion of his seder.

The Globe and Mail in Ontario prepares Lucy Waverman’s Passover Florentines. I am not a fan of meringue, but you might be. @LucyWaverman also shares her recipes for Matzo Brei and Dorie Greenspan’s Cured Salmon that her daughter Emma has adapted to fit a seder as an alternative to gefilte fish.

Over in Hawaii, the Star Advertiser doesn;t have a recipe, but it does lead with a story from Israel and Holon on African migrant workers in detention who are celebrating the Pesach Chag. Reporter Pat Gee also interviews Rabbi Peter B. Schaktman of the Temple Emanu-El of Honolulu about the holiday. The benign headline belies the rabbi’s theme of how Jews feared Christian celebrations of Easter in past centuries. They also include a now di rigeur pic of a Chabad emissary in a hotel kitchen. Kona Beth Shalom will have a community Seder at a Marriot; Chabad on the Big Island hosts a community seder; and Temple Emanu-El will have a seder as well featuring vegan and non vegan foods at the Hale Koa Hotel. Hawaiian Public Radio features a recipe for Mexican Chipotle Haroset. Shaloha and a Zissen Pesach.

In Toronto, Ontario, Danielle Oron (who has Israeli and Moroccan grandmothers) shares a recipes for BOOMWELOH (aka Matzo Brei) Breakfast Sandwich
with Ricotta & Sautéed Kale She writes on her I Will Not Eat Oysters blog – “Passover. Matzo. Wake up wanting bagels, but you want to be a good Jew. Seven full days of unleavened bread torture. Solution: Boomwelloh breakfast sammie. My mom used to make boomwellohs with all the left over matzo from our big Passover dinners. They’re delicious. American Jews call it Matzo Brei. I don’t know what that is. I is a immi, so I call them boomwellohs.”

The Toledo Blade focuses on gluten and Passover. It shares some gluten free, hametz free recipes for Pesach. Along with a recipe which they mention is not kosher for passover. Okay. They tell the tale of Mrs. Greenblatt who is hosting seders on the first and second nights of the holiday; she expects 21 at the table. She will serve gluten-free matzah balls in soup, gluten-free macaroni and cheese, and also a vegetarian lasagna using gluten-free matzo-style squares and Kestenbaum’s Oat Matzos from the UK.

The New Haven Register, home town of Yale University and New Haven style pizza, features UNSTUFFED CABBAGE. Author Stephen Fries made it for his mother in Florida and it impressed her. The recipe is from “A Taste of Pesach: Trusted Favorites, Simple Preparation, Magnificent Results,” a project of Yeshiva Me’on Hatorah (ArtScroll). Their BABY BELLA AND CRANBERRY BRISKET uses Chicken Broth as a base for the brisket. Who knew?

The Village Voice shares a recipe from Dan Cohen’s Macaroon Bible And unfortunately The Times/Picayune in New Orleans shares a yeast cake for the holiday they call “Passover/Easter.”

Thankfully up in Baton Rouge at The Advocate, they have a real Passover recipe for a Roasted Chicken. But good luck finding Kosher for Passover Brown Sugar 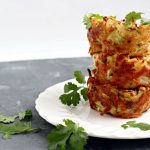 In Austin, Texas, four food bloggers (Floggers) got together to share some recipes. The Austin Chronicle shares some recipes from their ebook. The four bloggers are Whitney Fisch of Jewhungry in Miami; Liz Rueven of Kosher Like Me in New York City; Sarah Lasry, aka The Patchke Princess of New Jersey; and Austin’s Amy Kritzer of What Jew Wanna Eat. Amy Kritzer’s recipe for Individual Potato and Zucchini Kugels (Pareve, Gebrokts) is highlighted.

San Francisco? Nothing. No new recipes yet. We did miss The Downtown Seder at the San Francisco JCC An import from Manhattan). It featured Napa winemakers Ernie Weir of Hagafen Cellars and Jeff Morgan of Covenant Wines who poured their premium kosher wines; a kosher vegetarian menu by Milk & Honey, entertainment by 20 artists and thinkers, including Israel-born singer David Broza, and the world premiere of Lewis Black’s video “Plague.”

Wait. I lied. The San Jose Mercury news snagged a recipe from the Wise Sons Deli. The Red Wine & Onion Braised Brisket is courtesy of Leo Beckerman of Wise Sons Delicatessen I suppose it is appropriate to dine at a place called Wise Sons and not a place called The Child Who Did Not Known Enough To Ask A Question. (And what about the Fifth Child? The one who did not even come to the seder?)

Adriana Janovich of Spokane’s Spokesman-Review writes that kosher for Passover can be easy. Her Yerushalmi Kugel
is from Jamie Geller’s “Joy of Kosher”, and it substitutes KP noodles for egg noodles.

Balaboosta in Manhattan is hosting a Passover meal of shirt ribs followed by a milk chocolate but flourless torte. Only $125. You sure she is from Israel? And Louisa Shafia is hosting a rice filled Passover dinner in Manhattan, plus you get a copy of her cookbook, The New Persian Kitchen. It is only $85 plus taxes and fee (or a nice round $100). Less pricey is the $75 four course seder-meal at Joe and Misses Doe in Manhattan

Northern New Jersey’s Bergen Record profiles some area chefs that are preparing Passover desserts. Mark Roth, a Teaneck resident and former owner of Evviva in Manhattan’s East Village, started Tova’s All Natural (named for his 6 year old daugher), a Passover dessert business. He is busy making 10,000 macarons, which will be available in 15 kosher food stores in New Jersey. Also profiled is Israeli-born chef Tomer Zilkha, of Patisserie Florentine in Englewood, NJ. He is also baking for Passover, but his treats will be “kosher style.” 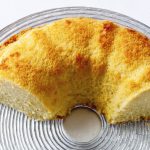 Further North and East, in Calgary, The Calgary Herald has a recipe for a light sponge cake, made with matzo meal and potato starch that is sure to evoke memories. This recipe, from master baker Annette Lerner, appears in The Holiday Kosher Baker, by Paula Shoyer. Unlike many sponge cake recipes, it doesn’t call for the eggs to be separated. Shoyer was skeptical initially, she writes, but found that the recipe produces “a tall, light sponge cake that tastes as if you have incorporated beaten egg whites.” With less work.

On that note. rest, relax, have less work, and have a good Pesach