Richard Silverstein Knows Nothing About Judaism 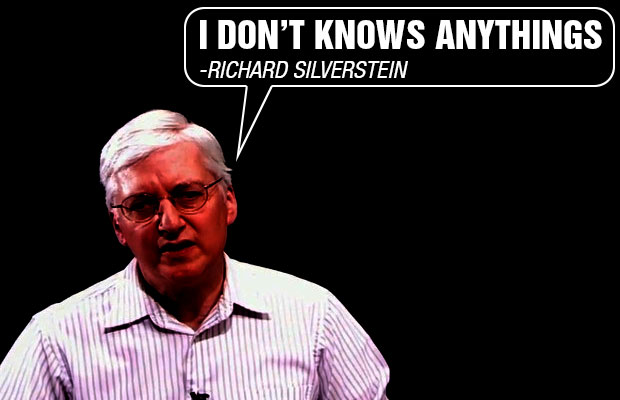 How many things can one person get wrong in one post? When you’re Richard Silvertsein, Jack-Off all trades, master of none, nothing surprises me anymore. A recent post of his likened the arm motions made by Kohanim during Birkat HaKohanim to a Nazi salute!

Just a little background here before we continue. Richard Silverstein is an anti-Israel blogger who runs a site called Tikun-Olam. He’s proven to be useful to some Israelis who feed him information that is under gag order in Israel and thus can’t be published here. That’s fine as it were, except sometimes he gets fed grossly erroneous information and despite that, he has gotten a big fat head thinking that he is some kind of expert on the Middle East, Judaism and any other subject that pops into his head. He’s also kind of like the anti-Israel version of US right wing shock radio. His language is laden with epithets, baseless suppositions and the sort of analysis that owes more to his anti-Israel bias than it does to any sort of journalistic expertise or integrity. And don’t you dare disagree with him either or else he will call you names and/or slander you at every opportunity. We’ve had several back and forths and if you care you can search for Abitbol on his site or search for Silverstein on this site. If you must…

An Israeli friend has found an amazing YouTube video (apologies that it is in Hebrew without English captions) of the quasi-religious ceremony at which settler paraded scores of white tunic-clad (also called “kittels”) men of various shapes and sizes as the coming generation of kohanim (priests), who would assume duties when (not “if”) the State destroys the Dome of the Rock and replaces it with a rebuilt Holy Temple.

So was this ceremony in fact quasi-religious? It is debatable that in the absence of the Temple, any such ceremony has zero religious significance. It is about as relevant as a practice Seder or Shabbat meal service commonly held in kindergartens. Does that make it quasi-religious? Again, debatable.

Silverstein claims these Kohanim were wearing “kittels.” A kittel is (for anyone who can read and use Wikipedia):

… a white robe which serves as a burial shroud for male Jews. It is also worn on special occasions by Ashkenazi Jews … The kittel … is used as a burial shroud, providing simple dress that assures equality for all in death. Because Jewish law dictates that the dead are buried without anything in the coffin other than simple linen clothes, a kittel has no pockets … It is also worn by married men on Yom Kippur and in some instances on Rosh Hashanah. The wearing of a kittel on the High Holidays is symbolically linked to its use as a burial shroud, and, to the verse “our sins shall be made as white as snow” (Isaiah 1:18) … Many Jews also wear a kittel when leading the Passover Seder. In some communities, the cantor wears it during certain special services during the year, such as the first night of Selichot, the seventh day of the Holiday of Sukkot (also known as Hoshanah Rabbah), the Musaf prayers of Shemini Atzeret and the first day of Passover, where the prayers for rain (Tefilat HaGeshem) and dew (Tefilat HaTal) are respectively recited. According to many traditions a bridegroom wears a kittel on his wedding day … The white color is said to symbolize purity, which partly explains its use during weddings. It is also felt to signify unity with the bride (who also wears white) and the beginning of a new life together. Another reason worn at the wedding is because it has no pockets, showing that the couple is marrying for love, not for what they possess.

In short, the simple linen cloth worn by the Kohanim in the video may look like a kittel, but those are not at all kittels. The Kohanim in the video were wearing what is properly called a ketonet, or priestly tunic. You can read about the ketonet in Wikipedia as well. They may look the same, but they’re not. This is a mistake that someone who is ignorant about Judaism can easily make. Ahem. Undertsandable when your only formal “Jewish” education was an MA in Hebrew Literature. Totally understandable.

Silverstein talks about the State of Israel inevitably rebuilding the Temple while ignoring the fact that the majority of Orthodox scholars and communities believe that the rebuilding of the Temple is generally left to the coming of the Jewish Messiah and to Divine Providence. We don’t have prophets who can help us determine the exact size of the biblical unit of measure (cubit), we don’t have a duly constituted Sanhedrin, we don’t have the ashes of a perfectly red Heiffer – and that’s just for starters – in short it’s only a tiny percentage of Orthodox Jews that wish to rebuild the Temple any time soon. The official State position is that the Temple Mount is to be administered by the Muslim Waqf and that non-Muslim access to the holiest site in Judaism is restricted. The Rabbinate officially forbids any Jew from entering the Temple Mount except for security purposes. There’s a very clear sign to that effect at the entrance to the Mughrabi Gate which is the only entrance non-Muslims may use to enter the Haram al-Sharif.

That having been said, fully 1/3 of the Mitzvot enumerated in the Torah relate to Temple worship and I don’t see anything wrong with keeping abreast of these. Traditional Judaism also continues to ascribe a special status to Kohanim – first aliyah (reading from the Torah at the synagogue), birkat hakohanim (priestly blessings), pidyon ha ben (redemption of the first-born son), restrictions on Marriage etc. This special status is universally applied in Orthodox Judaism, somewhat applied in Conservative Judaism and almost completely dispensed with in Reform Judaism, unless one chooses to maintain the tradition.

“So, when a bunch of seeming fanatics parade a bunch of fat, balding middle aged men through the streets of Jerusalem and tell us they’re the Jewish High Priests of the future, I sit up and take notice. This is friggin’ scary. Not because the rest of world Jewry will respond in any positive way to this rump attempt to revive the priestly elite. But rather because the combination of this religious movement allied with State power will send Israel even farther in the direction of religious holy war.”

However, he again seems to fail to understand that this particular religious movement has no connection to the State. Yet, the recognition of a special status for Kohanim, is in fact based on the notion that if and when the Temple is rebuilt, however it is rebuilt, its priests will be taken from those ranks. Silverstein exclaims “If there is anyone out there who objects, let them think back in Jewish history to the age of the Temple. Remember the corruption, violence, unrest, class divisions. Remember when the Romans destroyed the Temple and Rabbi Yochanan Ben Zakkai escaped to found his school at Yavneh and ushered in the era of rabbinical (rather than priestly) leadership. Since that historical moment Jews have rejected centralized authority in the form of monarchy or priesthood. Instead, Jews have embraced a decentralized, democratic form of leadership led by rabbis and lay leaders.”

Uhm. Democratic? I don’t recall ever voting for a Rabbi or a lay leader ever. Furthermore, Jewish leadership has always been decentralized – division of leadership is in fact one of the interesting contributions of Judaism – See Rabbi Sacks commentary on Parshat Tetzaveh as follows:

One of the most important Jewish contributions to our understanding of leadership is its early insistence of what, in the eighteenth century, Montesquieu called “the separation of powers.” Neither authority nor power was to be located in a single individual or office. Instead, leadership was divided between different kinds of roles.
One of the most important of these divisions – anticipating by millennia the “separation of church and state” – was between the king, the head of state, on the one hand, and the high priest, the most senior religious office, on the other … This was revolutionary. The kings of Mesopotamian city states and the Pharaohs of Egypt were considered demigods or chief intermediary with the gods. They officiated at supreme religious festivals. They were regarded as the representatives of heaven on earth … In Judaism, by stark contrast, monarchy had little or no religious function (other than the recital by the king of the book of the covenant every seven years in the ritual known as hakhel.) Indeed the chief objection to the Hasmonean kings on the part of the sages was that they broke this ancient rule, some of them declaring themselves high priests also. The Talmud records the objection: “Let the crown of kingship be sufficient for you. Leave the crown of priesthood to the sons of Aaron.” The effect of this principle was to secularize power … No less fundamental was the division of religious leadership itself into two distinct functions: that of the prophet and the priest. That is dramatized in this week’s parsha, focussing as it does on the role of the priest to the exclusion of that of the prophet. Tetzaveh is the first parsha since the beginning of the book of Exodus in which Moses’ name is missing. It is supremely the priestly, as opposed to prophetic, parsha.

But according to Silverstein, that only started after Yavneh with the establishment of Rabbinic Judaism, when Judaism suddenly and mysteriously become a Democracy (???). Thankfully, Silverstein removed comments where he claimed that 98% of Jews didn’t experience Priestly blessings (duchen-ing) at their Synagogues. Surveys show that in the US, 15% of Jews identify as Orthodox and they certainly experience Priestly Blessings and even some of the 18% that are Conservative belong to Synagogues that conduct Priestly Blessings led by Kohanim. I also know that of the 30% of the world’s Jewry that is Sephardic, pretty much all of their synagogues perform the blessings as well. It’s a hopeful sign that he erased that clearly mistaken information.

However, what he kept on, despite having revised the original post several times is this sentence: “There must be a loud, united voice saying Jews do not want this. We do not want priests, we do not want sacrifices, we do not want Jews raising their arms in a priestly salute that reminds some of us other similar past racist salutes, we do not want a Temple.” Here Silverstein likens the Priestly raising of the arms in an act of blessing the congregation, to a Nazi salute. To that incredibly offensive assertion, I am rendered almost speechless. It is so stupid, ignorant and hateful, even by Silverstein’s already low standards. The Priestly Blessing is a message of peace, whereas a hearty “Seig Heil” is anything but. I mean do I really need to say any more? Gosh, I hope not. Treat Silverstein’s opinions as authoritative at your own peril.

May the LORD lift up His face unto you and give you peace. Shabbat Shalom!