The Rolling Stones in Israel – Israelis Sound Off… 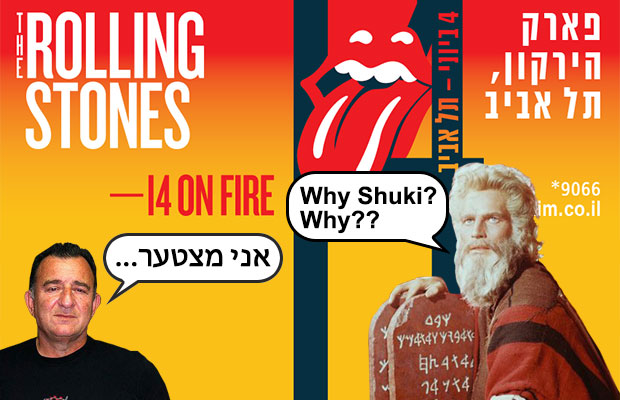 When Rolling Stones tickets became available in Europe for their upcoming tour, they were sold out within minutes. In Israel the situation is different. Despite the fact that since their formation in 1962, the Stones have never performed in Israel, tickets haven’t exactly been flying off the shelf. Say what you will about Israel’s hot economy, but perhaps the ticket prices are beyond most people’s means. General admission sitting-on-the-grass tickets are $200. Golden Ring in-front-of-the-stage tickets are $515 and VIP tickets are $820. Yikes! Or maybe folks don’t want to ruin their Shavuot holiday – you know, the one that commemorates our receiving of the Torah? Or maybe kids are just saving their shekels for when Justin Beiber returns. But Israelis being Israeli, they’re not being shy about their opinions, even on the event’s facebook ticketing page. Shuki Weiss, the concert promoter, and his staff are doing their darndest to delete negative messages but it’s hard to stop a flood, right? Here’s some of what Israelis have been saying:

Nurit: Bring the Back Street Boys. They are better and it’s about time

Shlomi: It might be worthwhile for the producers to change the date of the show. It probably will result in only minor losses and at least they won’t later regret and wonder what were they thinking that maybe the holiday that commemorates the giving of the Torah is just unimportant and meaningless

Harel: What’s with these insane prices? Shows for rich people only…

Itai: Boycott the show!!! The prices are inflated Shuki, it’s just a disgrace!

Moshe: I’m coming even if I had to pay 1300 shekels in the grass

Alon: Are they also performing in Nursing homes?
What happened, were they short on cash so they came to make some bank off of Israelis? Let them perform in Palestine!

Arik: At this price I can see Shlomo Artzi a few times and still put some money aside for Metallica

Sharon: Can I pay with human organs?

Dana Shuki Weiss should invite Bibi and Yair because at these prices only stupid people will pay.

To be fair, the prices paid in Israel are comparable to those paid in other large cities. The cost of transporting equipment and roadies to Israel is already exorbitant without taking into account security issues. Even Stones fans in Greece and Turkey will not be seeing the Stones on this tour due to the expense involved. And Weiss is entitled to do what he can to recoup production expenses which include a rumored and record breaking $6 million booking fee. If the show tanks, he’ll be the one covering the losses. And he may very well lose boatloads of cash. It’s going to be a busy summer concert schedule including the Pixies, Soundgarden, Neil Young and more. Money is not infinite. What sacrifices will Israelis have to make to see the Stones? What sacrifices will they not be willing to make? I guess we’ll see.

Israelis have to realize that shows like this are expensive and that despite the BDS implications, Rock Shows are not in fact a government service or a constitutional right. If you want to fight crowds from a patch of grass and watch a band perform on a giant screen, it will cost you $200. Plain and simple. If you don’t like it, don’t pay – but definitely don’t kvetch about it. And yes, the Shavuot thing is hella uncool but schedules are schedules and the outside world doesn’t give a rat’s ass about our cherished holidays, especially when most of us don’t either.