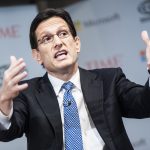 U.S. Congressman Eric I. Cantor, the majority leader in the U.S. House of Representatives was surprisingly defeated by a Tea Party affiliated candidate who challenged Cantor in a Republican primary election in Virginia. Cantor, who is the highest ranking elected Jewish Republican in the U.S. (the only one in Congress), and one of the most powerful senior Republican leaders, lost by an estimated 11 percentage points. In his past elections, he usually ran unchallenged in his political party primaries and won by wide margins and dozens of points in the general elections.

Cantor, 51, conceded the primary race on Tuesday night to Professor Dave Brat, a teacher of Economics at Randolphâ€“Macon College. Brat reportedly spent $200,000 on the campaign, compared to Cantor’s estimated spend of $5 Million. A member of the “Young Guns” coalition of young Republican leaders, and a leader of the Fall 2013 government shutdown, Cantor was accused by his opponent of being out of touch with his Richmond-area, Virginia district and aloof, and more concerned with fundraising in Washington, DC, than with conservative issues, such as immigration policy. 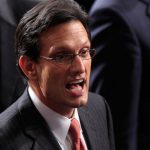 Brat received his doctorate in Economics at American University and his Master of Divinity from Princeton Theological Seminary. In addition to teaching Economics, Economic Justice and Britain In The International Economy, he is a specialist in the works in Ayn Rand (but not a Randian per se). He doctoral research was in the field of the impact of religion on economic growth. In “Human Capital, Religion and Economic Growth“, Brat analyzed the determinants of economic growth, with a focus on the 19th century where some countries became vastly wealthy and others languished. In its third chapter on the link between the 19th Century’s growth science and the religious leadership in countries, he concluded that Protestantism in Britain and Germany expanded education and improved governments that allowed for faster advances in science. Catholic France did not advance as swiftly.

Professor Brat was dismissed by many DC-area Republicans, viewing him a a pauper who had no chance against the second-most-powerful man in the U.S. House of Representatives. Larry Nordvig, executive director of the Richmond Virginia Tea Party, said Brat’s campaign sprouted from an idea at a dinner party with filmmaker Ronald Maxwell (“Gettysburg”; “Copperhead”). They were impressed by a speech Brat had given in support of E.W. Jackson, a conservative minister. Nordvig said that Brat is “presidential-looking,” and knew he found his man to take on Cantor. Of his victory, Brat said: “I was blessed. I mean, it’s a miracle. .â€‰.â€‰. God acts through people. And God acted through the people.”

The election defeat was a suprise for most actively engaged Jewish Republicans. Matt Brooks, president of the Republican Jewish Coalition (RJC) said the election results were “one of those incredible, evil twists of fate that just changed the potential course of history… There are other leaders who will emerge, but Eric was unique and it will take time and there’s nobody quite like Eric in the House to immediately fill those shoes. I was certainly hoping that Eric was going to be our first Jewish speaker (of the House)”

Rabbi Jack Moline, executive director of the National Jewish Democratic Committee (NJDC), said that Cantor’s defeat was a “bitter pill” in that Cantor was defeated by a challenger running to Cantor’s right on immigration. He said Cantor “has been undone by an issue that they didn’t make much progress on, but that is reflective of Jewish values. From the point of view of a Democrat, I’m not disappointed to see [Cantor] go. There is always a pride in the Jewish community when one of our own makes good, as I think there is in every community. So from that point of view, we’re disappointed, like we were disappointed when Rahm Emanuel gave up his quest to be the first Jewish speaker of the House.”

Ari Fleischer, a former White House press secretary for George W. Bush and a member of the RJC board, said that Cantor’s defeat was “very sad â€“ but my politics don’t revolve around my identity as much as they do my ideology.”

Politico.com reported that, “…with Cantor’s defeat, there’s no longer a point man to help organize trips to Israel for junior GOP lawmakers, as Cantor routinely did. Jewish nonprofits and advocacy groups have no other natural person in leadership to look to for a sympathetic ear. No other Republican lawmaker can claim to have precisely the same relationship with gaming billionaire Sheldon Adelson, a primary benefactor of both the Republican Party and the Republican Jewish Coalition. And no other member can play quite the same role in promoting Jewish Republican congressional candidates, as Cantor did in one election after another.”